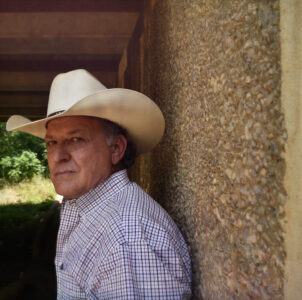 In anticipation of his upcoming album, Texas native George Dearborne is releasing his new single “Old Brown Bottle” this Friday, September 18. “Old Brown Bottle” is the first new track Dearborne has released in a little over a year, and while he’s no stranger to the Texas music scene, this release marks his first Nashville recording. “The Nashville recording experience is one for the memory books; I’m in awe of the professionalism and mutual respect shared among the fellow musicians and my producer, Jimmy Ritchey,” Dearborne said. Ritchey also co-wrote the track with Donald Poythress and Tony Wood.

While many songs being released now credit the sounds of 80s/90s country as an influence, to say that “Old Brown Bottle” is only reminiscent of that era would be a disservice. Rather, it plays out more like a transplant – like it was plucked straight from the era of geometric-print pearl snaps and big hair, only to be dropped into the ever-shifting genre we have today. It makes sense, given Dearborne’s background. He first started playing the drums in the 70s, eventually fronting his own band and opening for iconic performers such as Keith Whitley, Conway Twitty, Hank Jr., and George Jones, among others. Explaining his sound, Dearborne notes: “Even though I’ve taken hiatus, I’m staying true to my traditional roots. I hope to take listeners back to Cutter’s Dance Hall in the early 90’s alongside “the boys from Beaumont,” Mark Chesnutt & Tracey Byrd.”

“Old Brown Bottle” isn’t your average drown-your-sorrows kind of heartache. Even though his lady’s spark burned out and she turned the tables on him (“I’m always the first one leavin’/but you beat me to the punch this time”), Dearborne shrugs it off with roadhouse-style keys and electric guitar that’s ready to light up a barroom dance floor. Highlighting the jovial tone of his release, the singer points out that “‘Old Brown Bottle’ is a straight-up break-up song; rather than sappy, the upbeat melody gives the tune a light-hearted twist.” In that spirit, the single lays on the twang while facing the facts of the situation with an amusing comparison:

“then next thing I knew you tossed me out the window

once you had enough

rollin’ round in the back of your truck”

All in all, “Old Brown Bottle” is a honky-tonk romp that finds its niche in the post-breakup world of getting over someone by having a good time.  While it’s set to release on all major music streaming/purchasing platforms until this Friday, we’re excited to give you an exclusive early listen here at Raised Rowdy: