TYLER BOOTH DROPS “IN GOD AND TRUCKS WE TRUST” 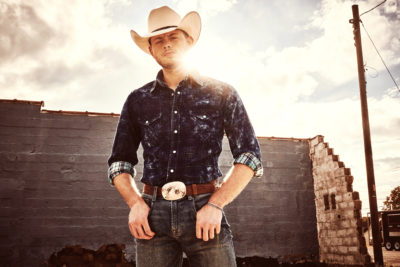 It’s country music, what else would you expect from Sony Music Nashville/Villa 40 recording artist Tyler Booth’s autobiographical new track “In God and Trucks We Trust”. Written by Booth, Randy Montana, and long-time collaborator Phil O’Donnell, the song illustrates the hard-working, faith-filled spirit Booth relates to from growing up in a small town in Southeastern, Kentucky.

“From behind that wheel of that American steel

We’ll be rolling high, sittin’ side by side

Pretty girls in jeans, hair in the breeze, hanging on tight

Tyler wrote on his Instagram, “NEW music coming this Friday, y’all! Can’t wait for you guys to hear this song. I wrote this one and mean every word of it!! It’s about about who we are, what we’re about & why.”

“When we wrote ‘In God and Trucks We Trust,’ I’d just gotten back from being on the road with Dwight Yoakam,” said Booth. “While on the road, I recall looking out the window of the sprinter van and seeing a dusty tractor out in the middle of a field somewhere in Iowa and thinking, ‘Man, they have to bust their butts for a living here too.’ To me it’s a story about how hard work, sacrifice, and the love of one another and God makes us stronger. It’s about the simple things in life that we do every day that make us a community. It’s about me, who I am, and why I am the way I am.”

“In God and Trucks We Trust” follows Booth’s debut tracks “Long Comes A Girl,” “Where The Livin’ Is,” and “Half A Mind To Go Crazy,” all of which highlight his smooth baritone vocals.

Road warrior, songsmith, and proud Kentucky native Tyler Booth has been making a name for himself in country music since he first started playing festivals around his home state as a high schooler. Born and raised in Wolfe County, Kentucky, he grew up in a musical family, often sitting in on the rehearsals of his dad’s rock band. After enrolling in Morehead State University’s Traditional Music Studies program, he quickly caught the attention of one of his professors, Scott Miller, an old friend of songwriter Phil O’Donnell (George Strait, Craig Morgan). After Miller made the connection, O’Donnell invited Booth to Nashville, where the two cut his first EP, Self-Titled , released independently in 2017. Fast-forward two years, and the singer’s star is rising quickly — he is featured on legendary duo Brooks and Dunn’s country swing-style ballad, “Lost and Found” on their REBOOT album, amid his heavy touring schedule, and a short nine months later, he becomes the first artist signed to Sony Music Nashville and Villa 40’s joint-venture agreement. Now, armed with an Outlaw bent and three infectious debut tracks, “Long Comes A Girl,” “Where The Livin’ Is” and “Half A Mind To Go Crazy,” Booth continues to build a career in country music, one fan at a time.

You can listen to “In God and Trucks We Trust” and the rest of Tyler’s catalog on all streaming platforms.

Keep up with Tyler: