Nearly a year after the July 2019 release of their last single “There’s a Weight”, Nashville-based folk/Americana group Lake & Lyndale have released a new single that celebrates forging ahead in the face of adversity. Written by Lake & Lyndale’s lead singer Channing Marie and guitarist Jonathan Krentz, along with singer/songwriter Alyssa Trahan, “Still Here” opens with a quiet resonance that eventually gives way to a pervasive sense of determination. Courtesy of producer Jon Estes, “Still Here” has a crisp overall sound that blends acoustic picking with gently rolling bass and percussion from Eric Clifford and Tyler Kloewer (respectively) while also working in an electric guitar solo that instills a redemptive quality in the track. With an undulating resolve, the melody intertwines with Marie’s vocals, which are equal parts adaptable, soft, and powerful. 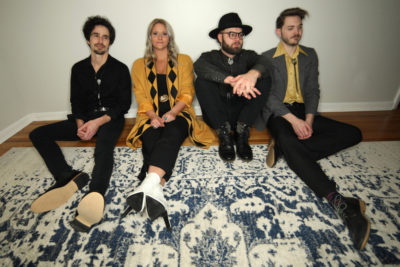 Originally from Minnesota, the four members of Lake & Lyndale moved to Nashville within the last few years – a big change which ultimately galvanized the group’s sense of unity. According to Marie, “With the move down here, there was always going to be a rebranding phase. But it actually also opened up a lot of creativity. The four of us are on the same page and share the same vision of who we want to be as artists and what we want to say. There was already a strong connection before the move to Nashville, and then going through a scary scenario like moving just made our bond as friends and a band stronger.”

Anyone who’s ever struggled with something knows that even with a strong ability to persevere, self-doubt can often present a separate battle in and of itself. For that reason, the lyrics in “Still Here” ring out with an added authenticity, as one of the verses finds Marie reflecting on her choices:

“planted all my pennies

call it gambling ‘cause there’s no guarantee

that I’ll see any return

or did I bury all I have with this dream?”

While Lake & Lyndale’s continued tenacity towards tackling the music industry’s inherent difficulties was partly what made “Still Here” a good fit for the group, songwriter and guitarist Jonathan Krentz gave some additional insight into where the lyrics came from: Netflix’s The Ballad of Buster Scruggs, particularly the portion that casts Tom Waits as a prospector. “I remember watching that, and it was just so visually striking, and the plot was so amazing…That was the inspiration for the first lines of the song: ‘I can’t say for certain if there’s any gold left in these hills/perseverance pays, or so they say, and I pray that it will.’ I think seeing Tom Waits’ character having to go through everything on his own was something that us as a band could relate to, especially as independent artists. Tackling challenges on your own is a universal topic, and I hope people find a little encouragement when they listen to the song.”