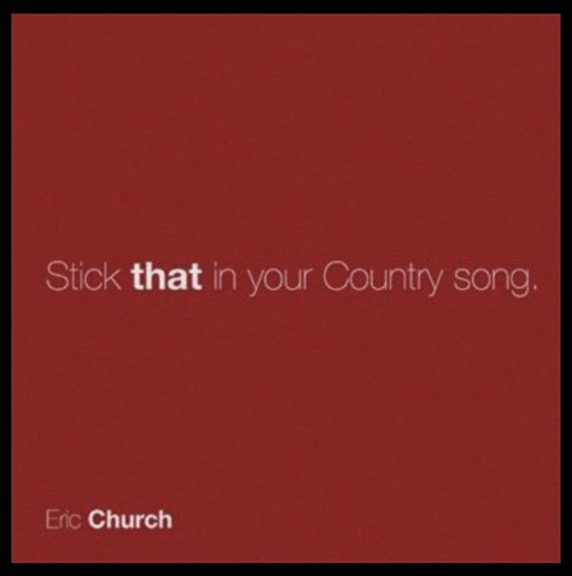 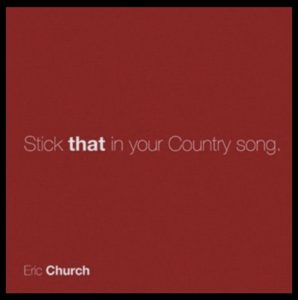 I know I am not the only one that’s been waiting for new music from THE CHIEF, Eric Church. The time has come, and he really stuck it to us with his latest release, “Stick that in your Country song”. In keeping with his trademark desire to put fans first, Church initially teased the release in a video sent directly to Church Choir members. “I wanted you guys to hear from me first that a new single is about to hit the world,” he shared. “It’s gonna be the tip of the spear for what’s coming after, and it’s a big spear. I believe it’s the best we’ve ever been in our career. I try to put myself in the most uncomfortable situations,” Church explained at the CRS “Chasing Creativity” keynote event earlier this year.

Country songwriting veteran Jeffrey Steele wrote the lyrics to “Stick that in your Country song” with relative country songwriting newcomer Davis Naish, who has more than 400 titles to his credit at BMI and has most recently written songs for Rachel Reinert’s Into the Blue album. Steele’s songs were an early 21st century mainstay at country radio, with “What Hurts the Most” being among his most popular hits.

Driver Williams, Church’s guitarist, posted this on his Instagram:

“Story time. We cut this hammer of a song on the last day of recording in the mountains of North Carolina earlier this year. What you hear is the very first take. During that four to five minute span there was a torrential thunderstorm raging outside. The creek behind the makeshift studio was cresting out of its banks, lights flickering off/on/off/on, chandeliers rattling on their chains, nervous eyes darting back and forth. It was a tense moment to say the least. After that first take the storm started to subside. We cut three or four more after that but none of them hit us like that first one did. Lightning in a bottle as they say. That same intensity and exchange of energy is echoed in this track. My favorite song I’ve been a part of in the studio. Thank you @jsteelemusic for writing and @ericchurchmusic for recording, and releasing this important piece of music. Can’t wait to share the rest with all of you. 🤘#stickthatinyourcountrysong #tipofthespear”

With this new single, Church offers a social commentary on the state of the world and provides a rallying cry for cities from Detroit to Baltimore and people from young military veterans to school teachers, culminating in an emphatic “Stick That In Your Country Song” as each chorus hits.  As a current teacher, I resonated with these lyrics and they really hit home… “Gimme one about the teacher who’s trying to change a life or two / She’ll be rocking out all night with you / Tomorrow she’ll back in a red brick school / Where the kids are climbing off the walls and it’s scary walking down the halls / She’s underpaid, she’s overworked / Come on man, shout one out to her” but that’s just what we expected coming from Church.

With a lyric video highlighting this poignant message, Church again puts the focus on fans first by offering his Church Choir an exclusive sneak peek at the video on Thursday, June 25 ahead of its wide release on Friday, June 26.

This is what we’ve been waiting for. Church is right, this song is nothing like what we have heard from him before. This isn’t the same guy who “told the establishment to go to hell”. I hear a much more constructive, timely and needed message about supporting real people and their struggles. “Stick That” is not a warning shot, it is a challenge to the country music industry to hold itself to a higher standard, to be better and to stand for something.

When the question of who will answer this call is asked, thousands will raise their fist and say I will, we will. pic.twitter.com/0K0bujiAu1

Church debuted one song, “Jenny,” during an acoustic gig in February and another, “Never Break Heart,” during the Academy of Country Music’s “Our Country” network special in April – the same month the singer teased “Through My Ray Bans” with an online video giving hope to fans in COVID-19 lockdown.

If there’s one thing for sure, whatever and whenever Church decides to release some new music it’s going to be a bad ass, COUNTRY smash.

Keep up with THE CHIEF: