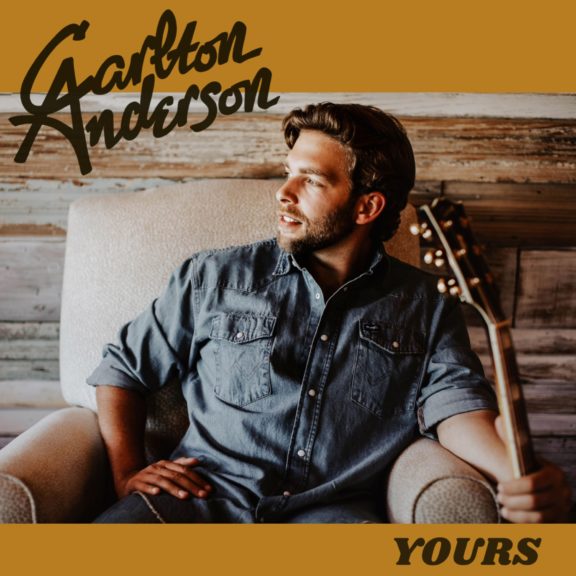 Carlton Anderson’s new EP, Yours, is densely packed. In the four songs on this album, Anderson shows us unique and distinct sides of his personality. He gives us a love song, an ode to a Texas city, a heartbreaking song about missing someone and hopeful, faith based, slice of life song. While this is a lot of ground to cover, the collection is expertly tied together with its elegantly simple acoustic styling. The strong fiddle presence makes each song feel almost like a duet. Fiddle of course is a staple of Texas country, but its inclusion combined with Anderson’s traditional honkytonk vocal sound gives us big George Strait vibes. His sound is very clean and draws the listeners focus to the beautifully written lyrics. Anderson tells us “With this EP I wanted to show off a little more than the honky-tonkin’ side we tend to show on the road. Yours is broken down to the foundation of my music; vocals, guitars, fiddle, faith, love and Texas. This will be my first body of work I’ve been able to put out since becoming an independent artist and I’m excited to continue to write my story with the country music I’m making.”

This is an incredible love song, there’s no other way to put it. It’s real and honest and genuine in such a Texas kind of way. Anderson says “I wrote this with one of my songwriting heroes Tony Lane and my good friend and producer Phil O’Donnell and I really think we wrote the perfect love song for me. This song says exactly how I feel about love and what explains what you’re willing to give up or go without once you’ve found the real thing.”

On its surface level song tells a story of leaving a city to follow a dream. There is room for interpretation that this song could either be about leaving behind a relationship in the town or loving the town so strongly that leaving mimics the feelings of ending a romance. It’s beautifully done. It’s easy listening, but the sadness of leaving makes this song both bitter and sweet. There is excellent imagery in this song, particularly in lines like “the sound of these boots on a worn sawdust floor” and “walk by the river while the moonlight’s still silver”.

Similarly to “Goodbye, San Antone”, “Bluebonnets” doesn’t explicitly address a breakup, this could just as easily be a song about missing someone from distance. The ability of both of these songs to be open to multiple interpretations showcase how well each one has been written. Both feel deeply personal to the listener while touching a wide audience with relatable feelings of loneliness and nostalgia. Again, the fiddle particularly lends itself to the sad sweetness of this song and this is only heightened by the harmonies.

This song is filled with hope. It gives a lot of good pieces of advice and reminds the listener to “let go and let God”. It is gentle, comforting and exactly the kind of song we need right now. This was an especially smart choice to wrap the album up with since it leans into the message that things will be okay in the end. To say that it leaves us on a high note is an understatement, but it should also be noted that this album is one that is filled with high points.