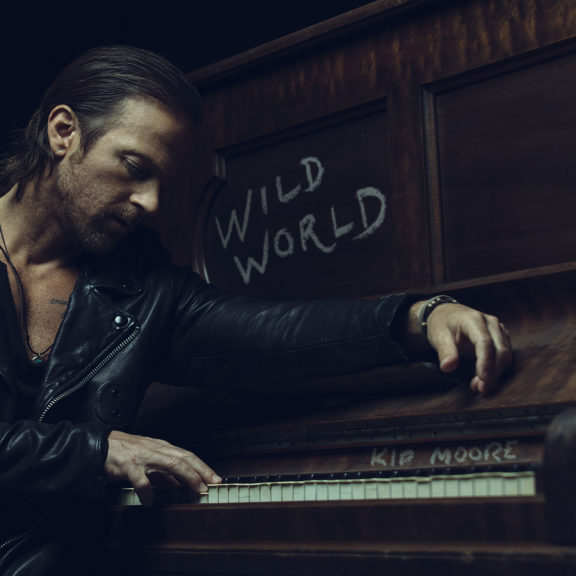 Kip Moore released his fourth studio album “WILD WORLD” – today, May 29th. To mark the release Moore shifted gears in the midst of the current landscape and invited an intimate group of industry and fans to a unique Drive-In album release event at the Stardust Drive-In in Watertown, TN last night. Attendees enjoyed a screening of Moore’s just-released documentary 7 DAYS AT THE ROCK available to watch here, followed by a compelling conversation with Moore and host Storme Warren, who were also joined by director and longtime collaborator PJ Brown.

Moore also released his ‘In The Wild Sessions’, which is an acoustic video series that will give fans insight into Moore’s  album. “The ‘In The Wild Sessions’ began as a way to tell the story of these songs in a bare bones kind of way,” shared Moore. “I love to travel, and so PJ and I scouted a spot in the desert in California and hand-picked some independent artists to do the sessions with, as a way of also highlighting their amazing talents too. We shot five videos in the desert and then when our plans changed a little with everything going on, we shifted gears while I’m here in Kentucky in isolation. The scenery here in Red River Gorge is also one of my favorite places to be and so I’m looking forward to also sharing this pocket of the world in some of the videos to come.”

Co-writing all but one of WILD WORLD’s insightful tracks, Moore navigates the search to find a place and purpose. Throughout the 13-song collection that search is revealed in deeply personal terms, with Moore even self-producing the set, with help from David Garcia, Luke Dick and Blair Daly on respective tracks. The weathered heartland-rock sound Moore has embraced on previous efforts gets its emotional volume pumped up, recorded live with a full band, as substance trumped style and the timeless prevailed over the trendy. Moore admits the result includes a few quirks – but that just gives WILD WORLD the character he values so much. “We wanted it to be more in-your-face,” he says. “More earthy, more analog.”

That straightforward honesty arrives early on the record, starting with the very first song, “Janie Blu,” about a girl who’s always been special, but often stood in her own way – a compassionate, force-of-nature plea to get your head right, before it’s too late. Likewise, the sturdy “Southpaw” stands as a grunge-rocking manifesto for the proudly out of touch, rejecting the notion of “going with the flow” and showcasing just how Moore stands apart in today’s Wild World. Meanwhile, the calming “More Than Enough” presents a better option, blowtorch anthems like the “Fire And Flame” pour gasoline on the quest for greater meaning and “Red White Blue Jean American Dream” flies down an empty highway of optimism.

“I know it’s an unsettling time for a lot of people right now, and so my hope is that this music can bring even just one person some peace,” shared Moore. “I try to make music that reaches people in a pure sense – something that’s light and easy to carry with you, but 1000 pounds of weight at the same time, and I think Wild World is just a depiction of what I see. Life is one crazy, wild ride. But it can be so simple if we look for the right things, and I think that is more important than ever right now.”

Continuing the celebrations tonight, Moore will perform songs taken from the record as part of a special livestream event from Analog in Nashville, TN where Moore will also be joined by some of his band for a power acoustic performance. The first time Moore will play some of the songs from WILD WORLD live, fans can tune in tonight (5/29) at 8pm CT to Moore’s Facebook and Youtube pages to watch the livestream benefiting MusiCares COVID-19 Relief Fund. Spotify will match donations to MusiCares via their COVID-19 Music Relief project.

Critics have already been quick to praise and highlight many songs on Moore’s WILD WORLD, with Rolling Stone applauding “Red White Blue Jean American Dream” declaring “in a throaty rasp…[the song] takes on a lean, Gaslight Anthem punk-Americana sound,” as Billboard shared “another highlight on the project is “Southpaw,” a guitar heavy arena rocker celebrating the underdog,” and Esquire spotlighted “Payin’ Hard” as “the heftiest emotional wallop of his career.” Moore co-wrote all but one of the tracks on WILD WORLD even self-producing the set, with help from David Garcia, Luke Dick and Blair Daly on respective tracks.

“I truly hope the fans are able to enjoy this body of work,” shared Moore. “A lot of people put countless hours and heart into this project. Cheers to all the fans that have been with us every step of the way.”

Keep up with Kip: