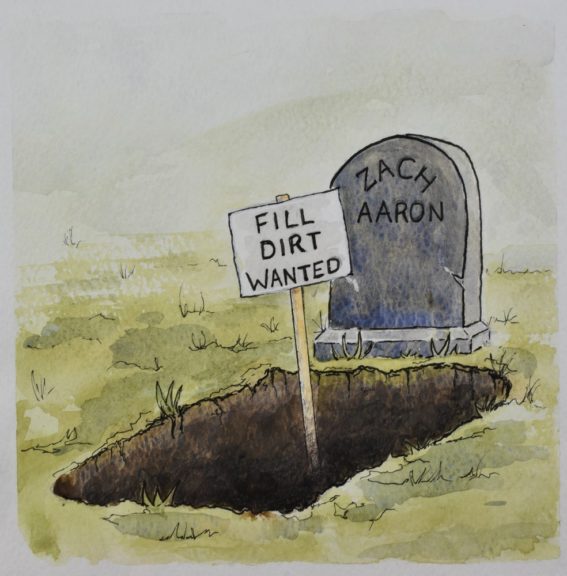 After living and working various odd jobs across the South, spending years in the Air Force, and amassing a variety of stories from his experiences, Texas singer/songwriter Zach Aaron has released his third studio album, Fill Dirt Wanted. It’s a brilliant and empathetic project that lives in the nadirs of human experience, setting the tone right off the bat in a line from the title track: “them rock bottom blues are a barroom poet’s dream.” The album, which was recorded straight to tape, is steeped in a rambling, rough-around-the-edges sound and explores death, homelessness, poverty, and guilt among other themes. Over the course of its twelve tracks, Fill Dirt Wanted has a timeless air that stands as a testament to both Aaron’s abilities as a storyteller and as a profound observer of people, situations, and perspectives.

Fill Dirt Wanted’s vast array of characters are all rooted in reality, inhabiting the Dust Bowl era just as easily as they would a forgotten highway underpass in modern times. The album broaches a wide range of topics – with vivid tales of murder, ghosts, and other escapades – all permeated by Aaron’s sharp sense of irony and black humor. Tracks like “Southeast Texas River Bottom Blues” and “Potato Salad” shine a spotlight on Aaron’s style of delivery, which incorporates spoken word, asides, humming, and laughter in his voice in true barroom-poet/Texas-troubadour fashion, effectively making listeners lean in to hear each story unfold. Aaron’s ability to adapt his vocals to the emotion present in each song is also exemplary; his voice rises with the high and lonesome ghost story in “Saratoga Light” with the same facility that it adopts a warm, expressive patina in “C.C.C.”.

Aaron’s narratives find their ideal home wrapped up in Giovanni Carnuccio III’s noteworthy instrumental arrangements and production. While the songwriting demands and rewards a careful listen, the music itself speaks just as loudly when it comes to the emotion contained in this record. Even from just a casual listen, it’s clear how the ominous, rolling shuffle of “Dying Hobo Blues” mirrors the narrator’s fate, and how the gnashing drums and banjo on standout track “Animal of Burden” match the dark angst of the lyrics (“I’m an animal of burden, I know my place/fueling all the fires in a rich man’s race/breaking my back with a smile on my face”). At some points the instrumentation even plays into the irony that Aaron works into the album as a whole; the deceivingly upbeat tempo of “No Road Too Cold” is a stark contrast to the lonely existence depicted in the song.

Zach Aaron and his team were also kind enough to give us a short interview for some further insights into his process and the album itself.

Raised Rowdy: You first started out in music while you were in the Air Force and then working a handful of different jobs all across the south. What was that like for you, and what made you decide you wanted to make music a career?

Zach Aaron: I decided I wanted to play music for a living about two years into my four-year enlistment, so the last two years in the air force went by really slow. When I left the service, I would work for a few months and save up money for studio time, head into the studio to record for a few days, then head right back to work. That’s how I paid for my first two albums.

RR: What musical and/or non-musical influences had the biggest impact on helping you find the sound you wanted as an artist?

ZA: I would say Guy Clark above all, Woody Guthrie being a close second.

RR: Fill Dirt Wanted covers a wide range of topics – where do you draw inspiration for your songs?

ZA: Anywhere and everywhere from real life and my personal experiences – there are a lot of characters in my songs, and very rarely are they fictional.

RR: What do you hope your audience takes away from the album, and what was your favorite part of putting it together?

ZA: I hope it makes people relate to each other a little better and makes them think about what it’s like to be in another person’s shoes. My favorite part of putting it together is simple: beers with my friends at the Bluebonnet after each studio session wrapped.

RR: What artists are you currently listening to?

ZA: Funny enough I’m currently on another Guy Clark kick. It happens quite often…cuz he was a badass.