HomeCountry MusicParker McCollum is “Like a Cowboy” in New Song

Parker McCollum is “Like a Cowboy” in New Song 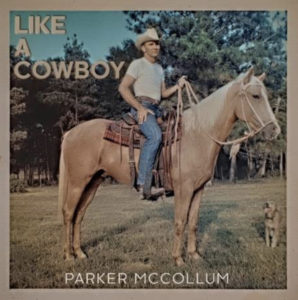 If you don’t know Parker McCollum’s name, you are about to. But chances are, you have heard of this young Texas native’s recent rise to stardom in country music after years of making a name for himself in the Lone Star State.

Parker’s unique sound blended with his ability to say exactly what’s on his mind have created an artist that is undeniably authentic.

In 2019, Parker released his first single with his new record label Universal Music and it has gotten some serious airtime on Sirius XM’s The Highway. Parker also just officially announced that “Pretty Heart” will be his first official single, pushing it to radio April 27th. And now, in 2020, Parker has released another song that continues to build his artistry titled “Like a Cowboy.”

“Like a Cowboy” is different from the other songs you might have heard from Parker due to the fact that he did not write it. Instead country music powerhouse, Chris Stapleton penned this tune with Al Anderson. It was also a 2010 studio production by Randy Montana, who Parker is a co-writer with on his last single “Pretty Heart”

“Like a Cowboy” is a quintessential Wild West song that perfectly describes the stereotypical character of a Cowboy in a modern light. With a retrospective melody that showcases Parker’s natural singing voice. We give this song an A+.

With his first two releases from what we can only guess is his first studio album associated with Universal, being what they are, we cannot wait to see what is in store for Cowboy Parker McCollum. The sky is the limit on this Texan in Country music.