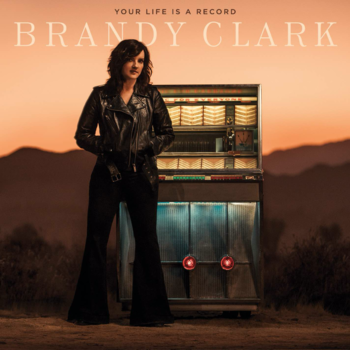 Tempering Sadness with Hope and Humor, “Your Life Is A Record” May Be Brandy Clark’s Best Album Yet

Prior to the March release of her third studio album, Your Life Is A Record, country singer/songwriter Brandy Clark already had an impressive body of work under her belt. She has co-writes on songs like Kacey Musgraves’ “Follow Your Arrow”, Miranda Lambert’s “Mama’s Broken Heart”, the Band Perry’s “Better Dig Two”, and even two of the tracks on Ashley McBryde’s newest album: “Sparrow” and “Voodoo Doll”. She’s also a six-time Grammy nominee, with two of those being Best Country Album nominations for her last two studio albums, 12 Stories and Big Day in a Small Town. Your Life Is A Record proves itself a worthy successor to both of those releases, with eleven beautifully-crafted tracks highlighting Clark’s exemplary ability as both a storyteller and observer.

When the first line of the opening track “I’ll Be The Sad Song” wafts out (“if your life is a record, people and places are the songs….”) it’s already obvious that Clark’s narration is going to be from a completely fresh perspective. As the album progresses, her gentle, velvety voice pairs with her dark and sharply-drawn sense of humor to sort out the overwhelming mix of emotions that accompany heartbreak, loss, and life’s other struggles. That being said, tracks like “Who You Thought I Was”, “Who Broke Whose Heart”, and “Apologies” aren’t your typical tear-stained-post-breakup elegies; Clark handles sorrow and regret with her chin up, dishing out lyrics that are distinctly self-aware, realistic, and cathartic.

The instrumental arrangements on the album as a whole are decadent and smooth. Classic country stylings meld with horn sections, strings, flutes, and various other sounds to create a record that can move from  the slow-burning “Love is A Fire” with its sweeping, movie-score-like qualities to tracks like “Bigger Boat”, Clark’s duet with Randy Newman that features a punctuated, dancing tempo. The LP’s swirling, jazz-like arrangements come as a result of the production work of Jay Joyce, who’s known for pushing limits and has worked with artists like Eric Church and Little Big Town within the country genre.

Yet another element setting this album apart is the striking attention to detail that Clark and her co-writers wove into the lyrics. Laser-focused observations paint vivid pictures, allowing listeners to sink into each scene to watch it unfold. The conversational reflections in “Can We Be Strangers” are detailed to the point of having a visceral effect,

Songs about New Orleans wouldn’t make me so damn sad

You wouldn’t be that number I deleted seven times

that hammer in my chest when someone orders Crown and Sprite”

and the protagonists in “Pawn Shop” aren’t simply selling a wedding ring or guitar. She’s parting with a “quarter-carat picture perfect dream”, while the guitar slung over his shoulder has “a few belt buckle scratches on the back, and the B-string tends to fall a little flat”. If you look at the album credits, though, the craftsmanship in the lyrics comes as no surprise given the caliber of Clark’s co-writers. Shane McAnally and Jonathan Singleton have co-written too many hit songs to even begin to list here, and Jessie Jo Dillon recently had a hand in Cole Swindell’s “Break Up in the End” and Maren Morris’ “Rich”. Complete writing credits for the album are as follows:

It’s tempting to say that Your Life Is A Record is Clark’s best album yet. She tempers sadness with understanding, acceptance, hope, and humor to create a record that offers insights and clarity in the aftermath of raw pain. On top of that, the project’s overall construction is impeccable, from the production, lyrics, sound, and vocal performance down to the order of the songs themselves. Even considering the high bar set by her previous releases, Clark and her team absolutely knocked this one out of the park and we can’t wait to see where this release will take her career. For more on Brandy Clark, check out her Facebook, Instagram, Twitter, and website.