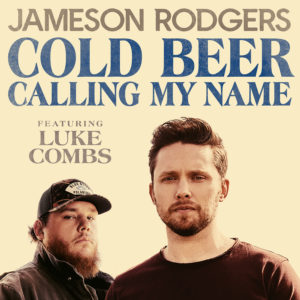 “It’s a fun, easy song, and I thought it’d be cool to have someone on it and at the time I was out with Luke Combs. I asked Luke if he’d like to sing on it – I know he’s a cold beer drinker like myself – and luckily it worked out and I’m excited for everybody to hear it,” Rodgers says of the track, which he co-wrote with Hunter Phelps, Brett Tyler, and Alysa Vanderheym.

Rodgers spent 2019 wowing sold-out crowds as an opener on Combs’ BEER NEVER BROKE MY HEART TOUR, earning his reputation as a “stellar performer” (Spokesman-Review). He plans to continue his own headlining GREW UP IN THE COUNTRY TOUR later this year.

About Jameson Rodgers : Mississippi-raised former college baseball player Jameson Rodgers is storming country radio with his Top 30 debut single “Some Girls.” Written by Michael Hardy, Jake Mitchell and C.J. Solar, the anthemic “Some Girls” is Rodgers’ first single released to country radio since signing a label deal as a partnership between River House Artists and Columbia Nashville. Initially making his mark on Music City as a behind-the-scenes songwriter, Rodgers has co-penned Platinum-selling hits for Florida Georgia Line (Top 10 single “Talk You Out of It”) and Chris Lane (No. 1 smash “I Don’t Know About You”), along with “Camouflage Hat” on Jason Aldean’s most recent album 9 and the title track of Luke Bryan’s upcoming release Born Here Live Here Die Here . The rising country star has released two independent EPs, which together have amassed more than 92 million on-demand streams. After supporting Luke Combs on his BEER NEVER BROKE MY HEART TOUR, playing more than 60 arenas and amphitheaters throughout 2019, Rodgers is slated to continue his headlining GREW UP IN THE COUNTRY TOUR later this year and is working on his debut full-length album with producers Mickey Jack Cones, Chris Farren, and Jake Mitchell.