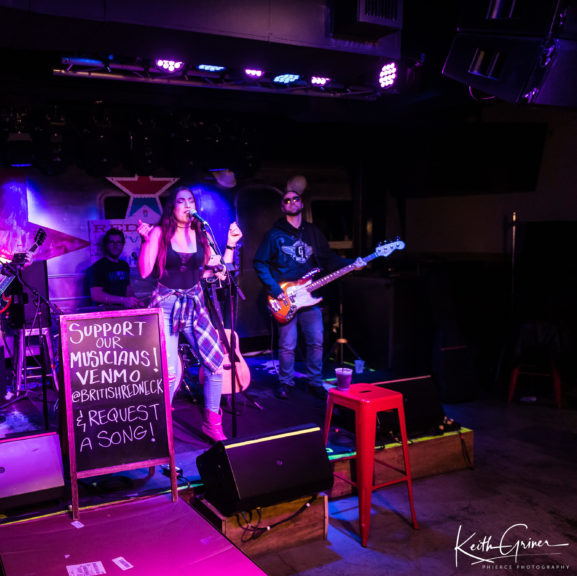 THE MUSIC HASN’T DIED, NEITHER HAS THE DREAM

Every year I try to make my birthday as memorable as possible, something my Mum swears will wear off the older I get. I don’t have to do anything extravagant, just surround myself with the people I love, the things I love and be thankful for another year to continue through life’s journey. Little did I know that my twenty-sixth birthday would be memorable for all the wrong reasons.

On March 16th 2020, it was announced that, among many other establishments, the bars on Lower Broadway in Nashville, Tennessee would close their doors due to the Coronavirus social distancing and quarantine measures. I am a singer/songwriter and I make my living performing in those very bars on a weekly basis, but in a moment, like many others, I had lost my job and, therefore, my only source of income to pay the bills and support my family.

It was devastating receiving text after text, email after email from the venues I regularly perform at on Lower Broadway, and from events I had been booked for on the road, that everything would be either closing, postponed or cancelled for the foreseeable future. The worst part was, there was absolutely nothing anyone could do about it.

I recall being overwhelmed mentally, emotionally and physically. I remember receiving countless calls from friends and fellow musicians who either wanted to console me after hearing the news or wanted someone to cry to that would understand the heartbreak and powerlessness they were feeling.

There was an inordinate amount of uncertainty, that remains today, not only for people’s safety with regards to the virus, but for people’s safety with regards to financial stability. Suddenly, thousands of musicians were, and still are, out of work and without income because thousands of venues have had to shut their doors for an undetermined amount of time. Many people have chimed in to tell us to tap into our savings, but the majority of musicians I know don’t have that luxury because they are living pay check to pay check or tip jar to tip jar. Why? Because with the growth of streaming sites and other means of consuming music for free, musicians are gradually making less and less money.

But, the COVID-19 outbreak isn’t just impacting musicians, and other creative people, financially. Most creative people I know do what they do because it is their dream, and some are lucky to make a living chasing that dream. It is incredibly difficult to process or cope with the potential reality that your dream could be slipping away through no fault of your own, because of something entirely out of your control. I would argue that the emotional and mental repercussions are worse than the financial repercussions because those feelings cannot be quantified.

For a while things seemed pretty bleak. For a while there was a sense of hopelessness. But then, we started doing what we always do when the road towards our dream starts to get rough, we take a slight detour. Instead of writing songs in rooms together on Music Row, songwriters used those feelings of powerlessness and hopelessness and started writing songs with one another via FaceTime or Skype. Instead of music industry professionals meeting in their offices, they began meeting using the Zoom app and discussing ways they could use organisations they are a part of to help their fellow creatives. Instead of performing in front of crowds at bars and venues, musicians started performing to crowds of watchers on social media via live streams, which not only gave musicians a means to generate income via virtual tip jars, but it gave watchers and listeners a moment of escape by bringing a concert directly into their living rooms.

It’s ironic that during a time where people are physically having to separate, we have actually never been closer together. The entire world is in the same boat, navigating the same treacherous waters right now and there is something very comforting knowing that. There’s something very unifying knowing that almost every single person on Earth understands what you’re going through because they are going through the exact same thing.

Within the music community it has been truly inspiring to see everyone working to ensure their fellow musicians and creatives have what they need to get through these difficult times. It has been incredibly motivating to see people from every facet of the music industry, and even outside of the industry, come together to support one another, no matter whether they’re colleagues, friends or complete strangers. It gives us hope and it helps to light a fire that tells us we are going to get through this because we are walking this path together.

The music community, in particular, is one that will never go down without a fight, and right now we are fighting with everything we have to ensure the music doesn’t die and neither does the dream.