Pickerington, Ohio probably isn’t the first place you think of when you’re looking to see the best up and coming artists out of Nashville; that being said, sometimes you find the best things exactly where you wouldn’t think to look for them. Tucked away in a strip mall just southeast of Columbus, Squeek’s Bar and Grill is what some would call a diamond in the rough. 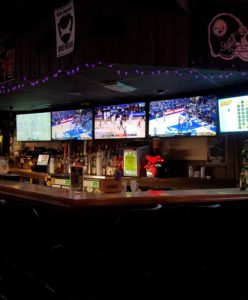 The little dive bar is an intimate venue with a capacity of about 80 people, so you know walking in that it’s going to be a special kind of night seeing a show there. Inside, there’s seating all along the bar and at various high-top tables spread out across the venue’s floor. If you do have to stand, there’s still plenty of room and you’re able to see the stage with ease from wherever you are inside the bar. 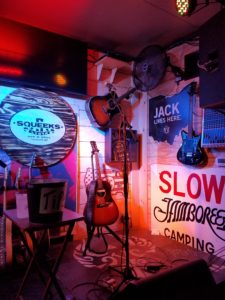 There’s a large parking lot with plenty of free parking, and the crowd, well – they’re just as passionate about seeing good, live country music as you are if you’re following Raised Rowdy. They truly have an appreciation for underground artists, and will probably tell you about an artist or two that they’ve seen at Squeek’s that you may not already know. The bar’s recent lineups have included Kendell Marvel, Rye Davis, Dan Alley, and Chris Canterbury (just to name a few) and they make a point to shine a spotlight on talented local singer/songwriters like Cliff Cody.

On top of that, the beer is cold, there’s a well-stocked bar, and there’s a kitchen. They’ve got a variety of bar-style appetizers and entrees, but if there’s one thing you need to do while you’re there – you need to try the Bubba sauce. If you’re a wing person, definitely get the Bubba wings. The sauce itself is a little sweet, a little spicy, a little garlicy, and great on whatever you want to put it on (you’ll probably have to resist the urge to eat it with a spoon, if we’re being perfectly honest). Lucky for us, they also sell it by the jar.

While you’re inside, you might notice “LTGTR” inscribed under anything that has Squeek’s logo on it. As you might guess, that stands for “let the good times roll” – a phrase that aptly describes the atmosphere inside Squeek’s. With management dedicated to supporting talented rising country artists and bringing them to central Ohio, a fun crowd, and killer wings, you’d be hard pressed not to have a good time while you’re in there. Bottom line, if you’re in or passing through the Columbus area, Squeek’s Bar and Grill is worth the stop. You can also follow along with them on Facebook and Instagram to keep an eye on the artists that will be playing upcoming shows, because as we mentioned, they have some top-notch talent coming through.