New York native Tom O’Connor has been busy since the release of his last single, “She’s Hell”, which we premiered back in October. He’s played at writers’ rounds like Whiskey Jam and Revival in Nashville, opened for acts such as Randy Rogers, Parker McCollum and Koe Wetzel during some of their Texas shows and recently had his song “Deserve” (featuring Luke Combs) hit one million streams on both Spotify and iTunes. Building on top of that momentum, O’Connor just put out his new single “Kill the Bottle” on March 6th as the next release off an upcoming project that’s being recorded at Melody Mountain Ranch in Stephenville, TX and Southlight Sound in Nashville. 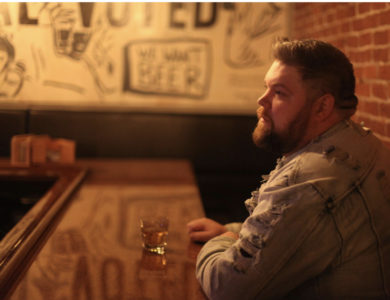 One of the best elements of country music as a genre is its ability to capture emotion and make a three-minute song feel like an old friend that knows exactly what you’re going through in any situation. Oftentimes, this ability manifests in the form of a whiskey-soaked heartbreak ballad exactly like the one Tom O’Connor gives us in “Kill the Bottle”, which he told us is “just a good old fashioned sad country drinking song.”

Written by O’Connor, J.P. Williams and Taylor Davis, the track dives in to the hopeless feeling of not knowing where to turn and just trying to cope when you’re living with someone’s ghost after a heartbreak: “but you’d still haunt me no matter what I do, cause the only thing I can’t forget is you”. Creating a sense of melancholy, the song’s guitar arrangements circle around the soft, raspy undertones in O’Connor’s vocals to perfect the song’s sadly resigned tone. Packed with honest confessions (“since you left me I’ve tried killing time, but it keeps killing me”), this track paints an unflinching picture of heartbreak’s rock bottom and sets it to a melody that will hit you right in the heartstrings.