Everywhere But On with Matt Stell, Chris Bandi and Ray Fulcher – Tour Review 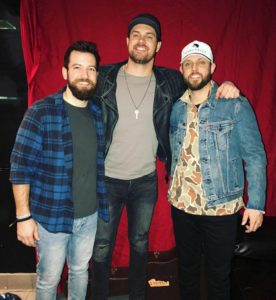 With festival lineups recently released and Mega Ticket packages becoming available, a lot of country music fans are making plans for “concert season”. For us Rowdies, concert season never really ends. In fact, we might even argue that the so called off-season is the best time to catch a show. Colder weather leads to more indoor shows and this gives intimate venues the opportunity to really shine. It allows for some of our favorite artists to get higher billing and longer set times which often include both deep cuts and sneak previews of unreleased music. One such tour that stands out is the Everything But On tour, featuring Matt Stell headlining with the support of Chris Bandi and Ray Fulcher. There is palpable chemistry between these artists. It’s obvious that they are all having a good time onstage and that energy is contagious to the audience.

Stell provides a VIP Experience that is truly a cut above the rest. The crowd is kept intentionally small to give a personal vibe. Guests are seated around a stool on ground level and given the opportunity to access the merch table early without worrying about losing their spot for the performance. Matt greets the crowd, promising that he will play his most popular songs during the full show and he wants to use this time to play any requests from the crowd. He answers questions freely and shares stories between songs. The room is quiet and attentive since this is done with an acoustic guitar and no microphone, but with no sacrifice to sound quality. At the show I attended, someone asked if there were any songs he had written on and wished he had recorded (a very Raised Rowdy question…) to which he responds with a chorus of a song we haven’t heard yet. He tells us at another show, someone asked him the first song he learned to play on guitar which was “Seminole Wind” by John Anderson. When the crowd reacts, he tells them he will play anything they’d like, but encourages them to make their experience unique. This includes a song that he confesses it’s been so long since he’s played he may not remember all the lyrics. After the set he spends a considerable amount of time taking pictures (including selfies!) and signing.

The supporting acts exceed their marks. It’s no secret that Ray Fulcher is one of the most talented and deservedly successful writers in Nashville right now. He plays a stripped down acoustic set accompanied by percussion that puts the focus on his vocal performance. There’s a great mix of songs for fans who came to see Ray specifically, as well as casual radio fans who recognize the number one songs he was a part of creating. Ray walks the line of heartbreakingly soul filled songs along and hard rocking country edge and pulls both off in a way that feels effortless to the audience.

In between Fulcher and Stell’s sets is relative newcomer, Chris Bandi. Bandi manages to pull off the impossible by playing a lot of new music and keeping the crowd engaged. He has a charming and energetic onstage presence. Between clear vocals and catchy refrains, he has the crowd singing along quickly to both unreleased music and his available catalogue. He moves around the stage and makes a point to connect with several audience members throughout the show. Using a break in his set, he play covers of some of the music that he says shaped him. During this exchange, he grabbed an extra drumstick and played his own symbol in a moment that was absolutely electric. This set not only gets a crowd ready for Matt Stell, but also for his own debut EP.

Stell finishes the show strong with a fully loaded 20 song set which includes bringing his tour mates back out for a Travis Tritt cover at the end. In a concert that is filled with high points, this moment really stands out as a treat. Any of these three artists is worth the price of admission on their own, but their combined energy makes this tour something special. It delivers in a big way and they’re just getting started.