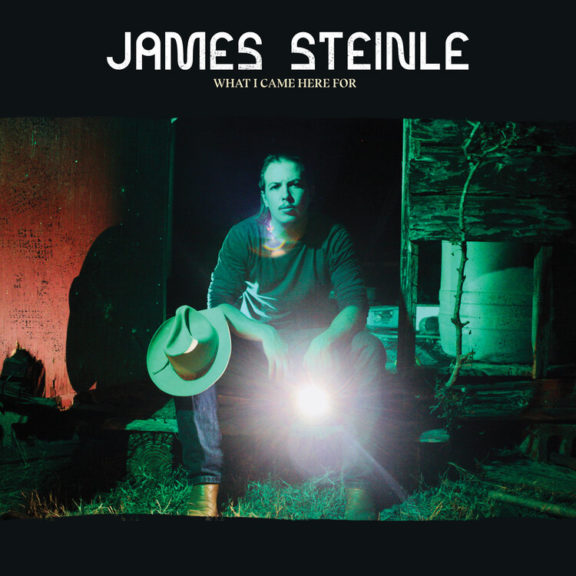 Some things in life simply exude a sense of “story”: the laconic old-timer on a barstool with worn and dusty boots, wrinkles and patina on old leather, a tin-type photograph. Even from first glance, it’s evident that there’s more there than what’s on the surface – instilling the urge to dig a little deeper. In that same way, What I Came Here For, the second studio album from South Texas native James Steinle, ambles to life as a collection of stories and characters, offering insights and commentary that apply far beyond the face value of Steinle’s straightforward and concise lyrics. Recorded live to tape in Lockhart, Texas at producer Bruce Robison’s studio The Bunker, the album emanates self-effacing wisdom and perspective by saying a lot without using too many words.

What I Came Here For opens with rough-and-tumble “Black and White Blues”, taking listeners for a ride alongside a narrator who’s on the run from police, unsavory characters, drugs and gambling in his final moments. Listeners meet one of the album’s other colorful characters in “Back Out on the Road”, where lively piano sets the tone for the whiskey-soaked roadhouse jaunt of a ramblin’ man who claims “I’m just a little more messed up than I get credit for”.

The theme of loss – through both faded love and death – is addressed throughout the album in a series of compelling narratives. Written with Juliet McConkey (who also sings on the track), “In Love Again” is a gorgeously sad ballad that details a love that’s fizzled out over decades: “Children grew/years they passed/now it’s side by side/or free at last”. The driving tempo of “Sentimental Plague” carries a cynical view of love, with gospel-style background vocalists adding emphasis to Steinle’s expression that “a sentimental plague ain’t love/it’s a goddamn merry-go-round”. Backing vocals from Jamie Lin Wilson add richness and depth to “Without You”, a song Steinle wrote after the passing of Jimmy, a man who was like a grandfather to him. “We’d go check cattle, get ice cream, and crank Tejano & Norteño music with the windows down in his 1996 sky Blue Chevy Tahoe,” Steinle said in a press release, “Those were some of my best childhood memories. He treated everyone with respect and gave me a definition of what a good person looks like. After he passed a few years back I, like many songwriters do when loved ones pass, wanted to pay tribute to him.”

Steinle also talked about some of the other themes that run through the album. “These songs are all about coping…with contemporary urban climates, and the homogenization of culture…This is a thread that runs all over the world and it weighs heavily on me. How we’re stripping places of what made them what they are in the first place.” Perhaps the best illustration of this comes in one of the album’s standouts, “Blue Collar Martyr”. Part warning and part death agony of the blue-collar worker, the track rumbles in like a dark storm cloud over flat land, speaking to the unstoppable and all-encompassing tide of mechanization and the collateral damage it causes. Bare-bones instrumentation mimics the rise and fall of Steinle’s voice, giving the track a powerful sense of inevitability.

As the album progresses, Steinle’s singing style – sometimes spoken word, sometimes a musical drawling lilt – lends a natural credence to his stories and reflections. The traditional Texas storytelling sound this creates allows What I Came Here For to give a voice to overlooked people and things, both in life and after life ends. The perspective of a narrator who has died cuts through doleful piano and steel guitar in “In the Garden”, one of the album’s more ambiguous and intriguing tracks. Title track “What I Came Here For” reflects on the passage of time, flickering through thoughts and musings about losing your sense of purpose in the noise and routine of everyday life: “I feel so lonesome/in this big ol’ crowd/feels like no one ever has a good thing to say/yet they always shout so loud”. In that same vein, the punctuated beat of “Low & Slow” encourages taking the time to do things the right way in a fast-paced world (“you know time ain’t ending/it’s just on a roll”).

All in all, What I Came Here For is a detailed and thought-provoking album that utilizes the best aspects of Texas country’s storytelling tradition to contemplate a modern life that is often grim, rushed, and isolating. A consummate observer of the world around him, Steinle was the sole writer for all the songs (with the exception of Juliet McConkey’s co-write on “In Love Again”). The rest of the musicians that give the album its richly layered sound include Scott Davis (bass, banjo, B3 organ), Geoff Queen (pedal steel, baritone guitar, dobro), Richie Millsap (drums, percussion), Sam Rives (Wurlitzer, B3 organ, piano, bass, backing vocals), Brian Broussard (electric and acoustic guitar), and background vocals from Juliet McConkey, Jamie Lin Wilson, Rich Brotherton, and Caitlin Palmer.