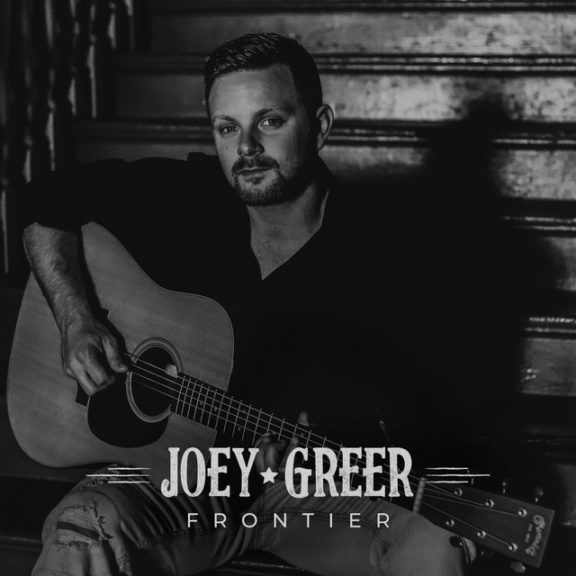 Some people herald in the start of a new year with resolutions, some bring it in with hangovers. Orange, Texas native Joey Greer decided to start his 2020 off by dropping a new album, Frontier, on New Year’s Day. The release is his first full-length project and follows the 2018 release of both “Mexican Getaway”, a Tejano-inspired single, and a three-track EP, Say You Will. A well-rounded project blending rock and country, Frontier has it all: heartfelt reflection, storytelling, uptempo barn burners, and love and heartbreak songs.

Kicking things off is “Ghost Town”, where haunting fiddle backs up an unheard confession to a former lover’s memory (“your eyes still shine with the sunrise in this town/you might be gone but you’ll never leave”). Greer’s songwriting prowess shines through with “Can’t Outrun the Thought of You” as he details the struggle of processing the shadows of a faded relationship. Overall, the album’s heartbreak songs are striking and fresh as Greer’s vulnerable and honest vocals give life to the visceral sense of hopelessness that his lyrics reflect. Perhaps packing the biggest punch in this department is “Old Habits”, where undulating guitar sets the tone for Greer’s lament:

“If I could get up and face the day

And pour this bottle down the drain

And climb out of this bed I’ve made

Then she’d be right back in my arms today”

The album’s love songs are of an equal caliber. In “Two Steps Away”, sweet observations give way to a powered-up chorus that lays out the realization that someone has your whole heart in their hands. Evening things out, Greer also paints a picture of the not-so-rosy parts of being in love in “Right Here With Me”. The song’s plaintive sound tracks along with the idea of being distanced from someone you love, where the days turn into “another sunrise, another shade of gray” in their absence.

Frontier’s uptempo tracks are lined up to give the album its appealing varied pace. “Save the Farm” is a rocker with an ominous feel, diving into an outlaw storytelling archetype about desperate times and desperate measures. Amid western-tinged guitar licks, standout track “The Devil’s Wife” tells the tale of a father’s warning to his son about a dangerously captivating woman: “you might think you’ll be alright/but son you’d better run for your life/you ain’t got what it takes to be with the devil’s wife”. With rapid-fire drums and guitar, “Good Enough” – an ode to newfound freedom and dodging bullets – brings a southern-rock vibe to the album.

Finally, Greer completely rounds out the album’s overall sound with “Momma Prayed”, a reflective and humbling track expressing gratitude, as well as an emotional cover of “How Great Thou Art”. This cover is the only track on the album that Greer didn’t write – the rest of the lyrics are entirely his own creations.