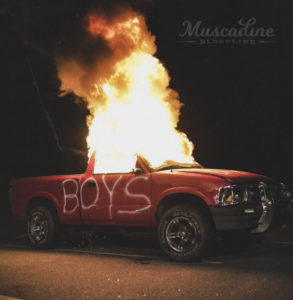 The fans asked and Muscadine Bloodline delivered. After much anticipation, the Boys have released a stand out EP to follow up their 2019 single “Put Me in My Place”. In doing so they only increased the buzz surrounding their first studio album set to release later this year.

The four song project features songs that were co-written by standout talents such as Tyler Reeve, Sean McConnell, Randy Montana and of course Gary Stanton and Charlie Muncaster themselves.

The EP’s lead-off track, “Too Much” is a fun, uptempo song that details the very best parts of a relationship comparing them to moments like a favorite song you can’t play too much, because really how could you get tired of a love that good?

The next song song on the EP, is the title track of the record and is my favorite. “Boys” offers a unique perspective on a relationship that has ended and your ex significant other has moved on with someone else. Someone that you actually think you could have been friends with if not for the obvious. I’ve never heard a song that has taken this concept and twisted it unexpectedly. And I love it.

“Don’t Say” follows up “Boys” on the project and is exactly the slow ballad that we needed. “Don’t Say” tells about the struggles of a relationship but ultimately brings the couple back together by saying “don’t say we ain’t meant to be.”

Basically, we believe the boys have done it again and we will continue to spin this record until we get our hands on that first studio album.