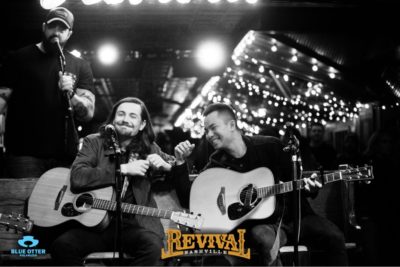 Vinnie Paolizzi and Gabe Lee met for the first time in an iconic music row bar called Bobby’s Idle Hour which is now something that, for the time being, is only a place of memory (Bobby’s closed in 2019 with hopes to reopen in the future).  Vinnie told us this about the iconic music row haunt. “We loved it because any time of day, all week long there were characters in the building and live music playing.”

Both Vinnie and Gabe’s musical stylings take you back in time in the music world, to a time when the sounds were tight and the guitars did the growling.  Vinnie decided to assemble a band and get a chance to show the world what he has been working on since coming to Nashville. Adding Lee as a keys player was an easy pick for Paolizzi. “When I was starting my band there was no question who I wanted to sing and play keys with us. Gabe is a BEAST.”  A fusion of genres with one thing very much in common between the two.  Truth.

Vinnie told us, “We had been talking about writing together because neither one of us was very comfortable co-writing. Both of us love old songwriters and full band rock music, the polished, clean-cut country has never been our thing.”

That was the birth of the track we are here to talk about today, “Babylon”.

“Babylon” definitely has a rock overtone with some airiness similar to that of a Springsteen song. The mix of vocals strung together from Vinnie and Gabe really sets this track off and has us keeping our finger handy for hitting that repeat button.

Babylon tells of the feeling of “having nothing left to lose” and taking your stuff and moving on to escape the confines of your current situation. The track takes you down the road with the writers and it is a fitting track to explore these writers we like so much separately as they share a song together for the first time.

Vinnie told us “This track got everyone in the band excited and singing so we knew it would be the first single. We recorded it at Shoebox Studio in Berry Hill and it was produced by Paul Hocenyc, mixed by Alex Saddic and mastered by Caleb Fisher.”

Here’s to new beginnings and to heading out to a place like Babylon, filled with the emotion and soul searching of moving on.