Shane Smith & the Saints started out ten years ago in Austin, TX and have since grown into performing hundreds of shows annually, spanning three continents with over 200,000 monthly listeners on Spotify. When you think of Texas bad-asses this band should be the first name to pop into your head. Shane Smith & the Saints have survived rattlesnake bites, pulmonary embolisms in foreign countries and recently a bus fire that destroyed almost every piece of equipment they own. When you blend Country, Americana, Folk, Bluegrass and Rock and mix that with high energy you get Shane Smith & the Saints.

Their latest album, Hail Mary, came out in June and was released in four chapters with songs coming out over the course of eight weeks. Shane explains, “Hail Mary is a culmination of the last five years we’ve spent touring extensively across the US and developing our sound as a band”. The first chapter was met with much excitement and had over 100,000 streams in the first weekend alone. In an effort to retain as much control over their sound and remain as independent as possible the album was released through Geronimo West Records LLC, which is owned by Smith and his wife.

Hail Mary was produced by Mark Needham who has worked with a number of other major acts including Imagine Dragons and The Killers. Mark encouraged the band to record the album live in the studio to capture the feel and energy of their show. When asked about this recording process Shane recalled, “Recording this album live was a very natural process for us as we developed our sound more through playing gigs than rehearing.”

Shane opened up a little bit about the bus fire in November stating, “It all happened so fast, we were sleeping and our bassist came out of the back lounge yelling for the bus driver to pull over and everyone to get out because of smoke. We didn’t think to grab the keys to the trailer with all our equipment as we ran off the bus waiting for the explosions of an action movie.” The band lost all their gear and belongings but managed to not miss any shows due to the generosity of others and perseverance. Shane remained positive saying that while it was a huge loss they are thankful no-one was hurt and for the outpouring of support from friends, family and fans. 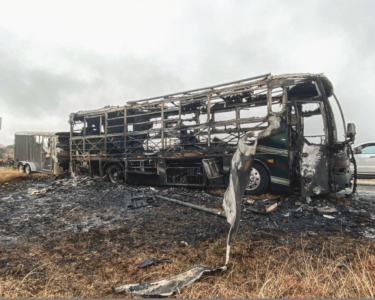