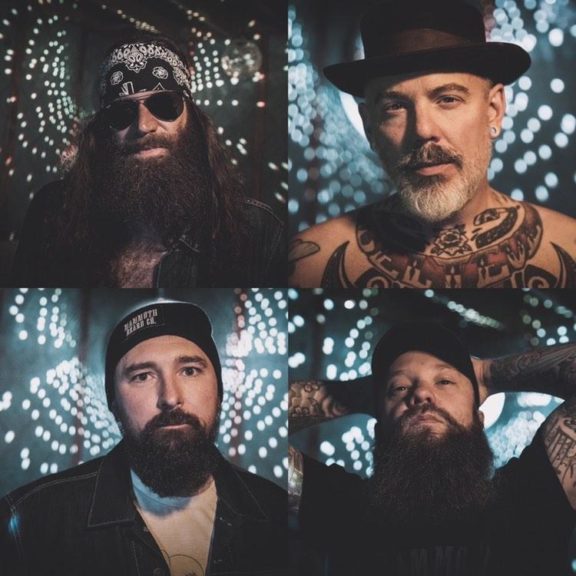 “It’s the only project I’ve ever been in that I gave no fucks and all the fucks at the same time.” – Erik Dylan

It’s a strange time in the musical landscape. So many people are trying to put every artist, hell every song for that matter in this tightly wrapped little box. I get it. It makes it easier to just cast the musical expression as something you have heard before or something familiar. It let’s you spend less time analyzing and paying attention to what you really are experiencing.  Most music, at least at some point though ends up being a mix of many influences. Often it comes from what the artist listens to and inevitably draws from. Often it has a lot to do with what chapter of life that the artist or band is in at the inception of the track.

All this leads us to the band we are here to discuss today – Black Mountain Whiskey Rebellion. A band that we came to know from their inclusion of our favorite Prairie Rocker, Erik Dylan. Yes, THAT Erik Dylan, the one that the Raised Rowdy family knows from his solo projects and hit songwriting, co-penned with some of Country music’s fastest rising acts out right now. “We don’t fit in a format. Luckily our listeners don’t either. They just like what they like,” Erik told us. That outside the lines mentality really bleeds through in this bands style and their fan base.

Black Mountain Whiskey Rebellion debuted their first single in 2018, but has known each other a lot longer. They are a collection of pieces that might not seem to make sense separately but when they come together, the music makes all the sense in the world. Dylan told us “This is the best group of musicians I’ve ever had the opportunity to make music with. They are true badasses. I am just honored that they asked me to be part of it.”

A collection of friends before they ventured into this project the band consists of Mitch Merrett, Corbett Frasz, Greg Carroll, Erik and whatever guests the band feels is going to get their sound where they want it.

Erik told us ”We have lots of fun, make great music & drink too much on stage. If it wasn’t fun we wouldn’t do it. If it ever stops being fun we will quit.” The crowds for their shows have been getting bigger and bigger with most of their dates coming in Canada.  Gritty, real and powerful percussive guitar driven lyrics and prose is what you get from this band.

So after that introduction for those who have not heard of the band yet let’s dig into their first music video for “Wolves At The Door”.
While music is the universal language, video for better or worse can take what you feel and turn it into something more real.  A video can capture an expression just like a song can but in some cases makes the thing more physical. More real. It extends the art to a different level. That is why a live show or even a music video can work as an anchor for actually seeing what the artist is doing or trying to represent.
Black Mountain Whiskey Rebellion deliver on anchoring a more physical representation in their debut video.  Dylan had this to tell us about the experience. “This is our first music video. And I think it’s a honest example of what we like and what we create. No frills. No bullshit.” You can truly explain the band’s music in almost the same quote. So take a peak at this music video. Feel who BMWR is and where they want to take you.