Following up the 2017 release of his last album, Old Freight, Folk and Americana artist Alan Barnosky is releasing “Beer Cans and Quarters” as the newest single off his upcoming EP Lonesome Road. The track highlights the North Carolina-based singer/songwriter’s knack for approaching life’s “heartbreak, heartache, upsets and bad breaks” with humor, making fiction applicable to everyday life. He elaborates, “The story is entirely fictional and kind of ridiculous, but I like to think there is some truth in it. We’re all trying to find our place in this world, and it can take some tough mistakes and hard soul searching in order to be able to find where we fit in.”

As the first few notes of “Beer Cans and Quarters” waft out, the track adopts an ambling, easy rhythm, with gentle guitar lending cadence to Barnosky’s reverie-like storytelling. The delicate mandolin adds to the patina of Barnosky’s old-fashioned vocals, creating a nostalgic sound further amplified by lyrics which incorporate sights and sounds of a bygone era. “I was listening to a good bit of classic country at the time” Barnosky explains, “and some of the outdated themes and imagery from that style of music crept into this song – references to payphones, jukeboxes, and smokey barrooms.” 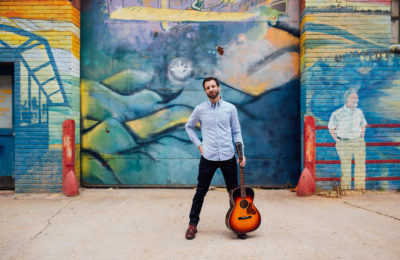 The single’s authentic sound and natural feel likely derive from the organic way Barnosky got the idea to write it. “I was hanging out with some musician friends one Sunday afternoon a couple of years ago, playing tunes on a front lawn and working our way through a few six-packs. My banjo-player friend Mike Malek joked that we should go down to the nearby road and play for the passing cars, and that some might even give us tips – he added: ‘They’ll be throwing beer cans and quarters at us!’ While we were all laughing I had to pause for a moment, realizing that the phrase ‘beer cans and quarters’ could actually make a great song title!”

Barnosky’s group of friends also contributed beyond helping spark the idea for the song: “After writing it, I recorded a voice memo and sent it off to the folks who were at the jam that afternoon. They thought it was great, and Mike seemed to like it most of all. Robert Thornhill was part of that original crew, he now plays mandolin and sings harmony on this recording. We never went down to the road that day, but we did play songs together well into the night.”

With vintage influences and an ability to poke fun at struggles in life, Barnosky and his team have crafted a catchy tune that speaks to fans of classic country and folk music alike. While “Beer Cans and Quarters” is set to release on December 6, 2019,  you can catch an early listen exclusively at Raised Rowdy with the link below: