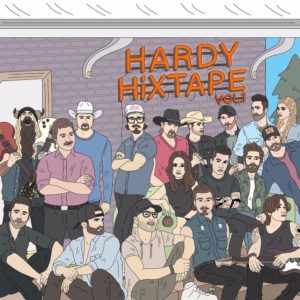 HARDY is one of our favorite artists right now. He’s fun as hell to watch, a killer songwriter and honestly I am not sure if he really cares if he gets famous. That IDGAF attitude just makes me feel like he’s the kind of artist I want to get behind. Oh yeah, and did we mention he writes and records super catchy BIG melody and lyric driven country music.

Since that first EP when he had like 500 followers or some shit like that, we have been trying to get an interview with him (we are still waiting HARDY). Here is why. His music has this kind of authentic redneckness. He’s just a super talented dude who happens to write jams and has really famous idiot friends. He’s like the poster child for talent and being a good hang, making it all work out. Big Loud seems to have their finger on the pulse of what this part of the country music scene is, get killer songwriters and incredibly talented folks, put them with a top end producer and make country music gold.

This new album is filled with creative word play and explaining things that seem simple in a new way. It is absolutely PACKED with all star guests from track one through ten. HIXTAPE includes 17 other artists, all of which are stars or budding stars in their own right. Each track has lyrics that you could hear Blake Shelton singing (HARDY co-wrote Blake’s last two singles) but sang with HARDY and his boys.

It isn’t often that a country artist releases tracks with artists from other labels and that is another thing that sets this project apart from the country norm. The reasoning for this lack of collaborations is it ends up being a problem on releasing a song as a single to radio since the other labels have to all agree on the release or some kind of nonsense like that. But in that classic HARDY IDGAF way he just loaded up his whole crew on these tracks. This is similar to how a crew of rappers does it, but is often not seen outside of that world.  As we see the way music is published changing (single releases or EPs as opposed to all albums) it is interesting to see some other ideas, like lots of collaborations coming up in country music now too.

It might not seem like a risky move but in a country market that is often still traditional when it comes to releases, HARDY and Big Loud are really pushing boundaries. If this works and we think it’s working, it will allow for the game to change, even if just slightly.

Give this album a FULL listen if you haven’t yet. It’s country music gold wrapped up in fun lyrics and extremely well produced tracks. That’s what HARDY is known for and this album is no different.

Country music and a damn good time. We kinda love it.