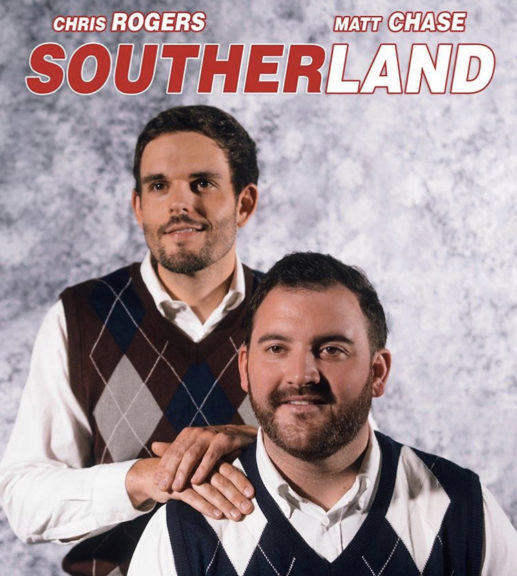 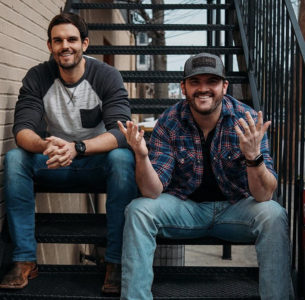 If you read last week’s article on our interview with Southerland, you’re probably wondering what happened. And if you took our suggestion and followed them on social media, you might also be wondering how an EMT from South Carolina and an IT guy from Georgia end up on stage at Ole Red, dressed in argyle sweater vests like the cast of Step Brothers. Just in case you missed it, it looked a little like this… 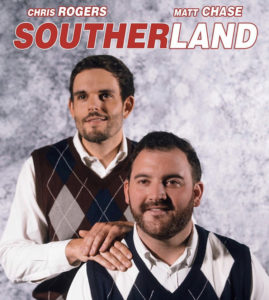 The guys challenged the Southerlanders (the unofficial, official name of their followers) to comment at least 100 times on their latest video and they would rock the outfits during their set. Didn’t take long for the comments to come flying in and sure enough, they knew they were gonna get some strange looks downtown. But, a bet is a bet.

Now let’s back up. I know you’re still dying to find out how they met in the first place, why they became a duo and where, or should I say who, came up with the name Southerland. They’re about to tell you.

Raised Rowdy: How did you two meet and decide to become a duo?

Chris: I was in Nashville for 3 or 4 years before I even met Matt. I was writing with Ray [Fulcher] and he pulled Matt in and said we should all write together. So we did and we hit it off. For a long time, the first 2 or 3 years we knew each other, we would just play shows in Auburn, Alabama, Tuscaloosa; hop over to Atlanta and play for a night. Since Matt is from South Carolina, sometimes we’d just head there and play at the Windjammer or we’d go down to Statesboro, Georgia where I went to school.

Matt: We would play venues from A to Z. Places like, how the heck did we get this show? And why are we playing this show? There was a point where I would just cold-call people. I’d call venues, booking agents, friends of mine. I did it a lot. But about 85% of it didn’t turn out; we’d just strike out. But occasionally we’d get a hit or a cancellation and we’d get in there in a weird way. If they liked us, we knew we could go back and likely get another show so we’d work on that angle. 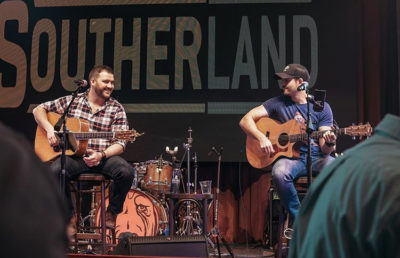 Chris: We would literally play 4 hour cover shows, like 99% covers. We weren’t gonna sit there at Sky Bar in Auburn, Alabama and play our own original songs to a bunch of drunk college kids at 1:30 in the morning. They don’t give a shit about that. They wanted to hear George Strait, Luke Bryan, or Blake Shelton; songs they could sing to.

Matt: Remember, we weren’t Southerland at the time. He had a solo career, I had a solo career. We were kinda doing things our own way. Purely to pay rent and feel like we were still performing. I had this Bose system that I would use and we could literally setup and play anywhere. This is actually how it all started for us. We would do all these covers and requests. Chris would be out here playing songs like Complicated by Avril Lavigne, literally everything under the sun. Someone would say I’ll give you $10 to play whatever song and I was like, okay, that’s a tank of gas. We’d fill up our phones with any song we could and listen to it and just play it. Eventually people would come up to us and say, “We love what y’all do, what’s your band name?” I don’t know how many times we were asked that and we’d just say we weren’t a band and we have our own careers. But we ended up playing so many shows together that I naturally learned his voice and he learned mine and the harmonies just started falling into place. We were actually playing as a duo without realizing it.

Chris: We were developing ourselves as Southerland for almost 3 years as organically as it gets. We didn’t meet and decide to become a duo; it just naturally happened over time. I actually credit Lynn [Oliver-Cline], from River House, for noticing it before we did and for being so persistent for so many years.

Matt: We were going to play the Key West songwriters fest a couple years ago and because it was so expensive to get there we took my sister’s Honda Civic and played shows all the way there and all the way back. Once we got to Key West, we weren’t playing official shows so we decided to take up a residency in a bar called the Lazy Gecko. We played it every night so once the BMI shows were done people would head in there and we would just do 4 hour cover shows. Buddies would walk by and see us in there and come play with us, like Ray and Faren and Jordan Rager. But, I’ll never forget the night Luke [Combs] came in and played Hurricane. This was the week Hurricane went #1. It was nuts and as soon as he started singing the place erupted. It just so happened that when Luke came, Lynn came with him. She watched us play and then pulled us outside and said, “I know you don’t know me and I don’t know what y’all are doing, but I will sign y’all to a duo deal right now.” We had no songs as a duo and it was such a foreign concept that we kind of just wrote it off at the time. But had it not been for Lynn pulling us aside and opening that door, who knows if we ever would have made the decision that got us here today as Southerland.

Raised Rowdy: Speaking of Southerland, how did you come up with the name?

Chris: So December of last year, we played a show at Erik’s Church, in Windham, Maine. We actually did a residency with none other than Mr. Ray Fulcher. It was our first time ever going to Maine. We had some time to kill on our 18 hour drive up there. We were in the van, the one we came here in today. Ray’s bass player, Davis Branch, decided to google “What to do in Maine.” And this was at a time when we were mentally exhausted and we’d been trying to think of a name for months. We tried a bunch of things that just didn’t work, we just didn’t feel it. Friends and family, everybody wanted to be the one to come up with our band name but they were terrible. Like, really bad ideas. Anyway, he pulls up this page and starts reading off these random facts about things in Maine. There was this place, Bath Iron Works, in Bath, Maine. They built this battleship or destroyer called the USS Southerland, and as soon as he said that we all looked at each other and said that sounds awesome. That was such a cool word, such a cool name.

Matt: I knew as soon as it came out of his mouth that I liked it. We had tossed around names with the word southern in it because well, we’re from the South. We wanted it to be a tip-of-the-hat to our southern roots. So it really lends itself to that. Credit to Davis for sure. Ever since then, it just stuck. 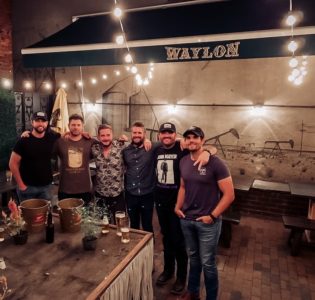 There ya have it folks. The inside scoop on how Southerland came to be. We aren’t quite done yet. Check back next week when we dive into the EP, Six String Sessions.