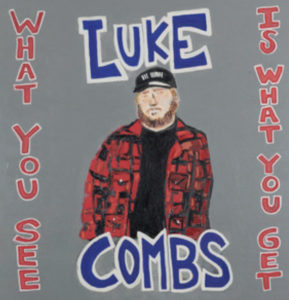 Social media has been flooded with posts and pictures of Luke Combs‘ new album cover since the release of his new song, “1,2 Many”.  The artwork was unveiled as Luke shared the concept behind the painting. He was always told that “album covers are either a piece of art or a picture of yourself” and decided he wanted to do both for his second full length album. He reached out to close friend, Rob Hendon, known to many as “The Original Guitar Painter,” to bring his vision to life. With a title like, “What You See Is What You Get” we couldn’t imagine a more fitting image for the cover art.

In addition to the album title and cover reveal, Luke dropped a killer new track that features country music legend, Brooks & Dunn. Appropriately, the song lends itself to a 90’s country beat while making it feel relevant to modern country radio. Luke doesn’t shy away from singing songs about throwing back a few beers and this song is no different. We all have that one friend who talks us into going out on any given night and according to the opening line of the song, that friend for Luke is his guitar player, Rowdy Rob. Inspired by a 6 o’clock phone call from Rowdy, the boot stomping, beer chugging, honky-tonk tune came to life with the help of fellow songwriters Drew Parker, Tyler King and Dan Isbell.

The release of “1,2 Many” has given fans a taste of what is to come on the highly anticipated album, “What You See Is What You Get,” dropping on November 8th. We have no doubt this album will be some of the best country music we’ve heard in a long time and can’t wait to see how many more records he’ll break.

New album What You See Is What You Get available Nov. 8! Pre-order now at https://t.co/MSpVDzlxSX and receive “1, 2 Many” feat. @BrooksAndDunn! pic.twitter.com/4xixRVZHIv

Until then, keep “The Prequel” on repeat and maybe even shotgun a beer or two with your crew while you anxiously await release day!!!