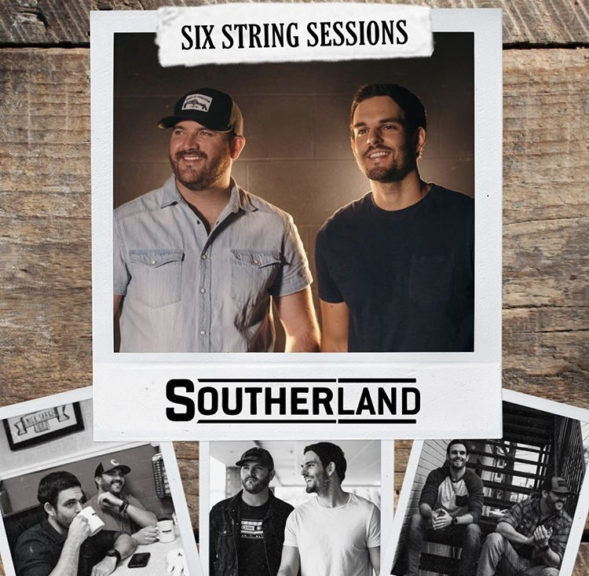 Meet Southerland – What You See is What You Get 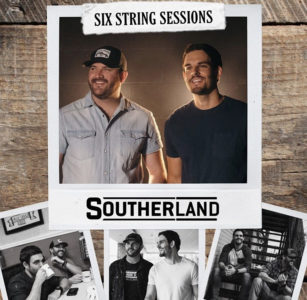 With countless new singers and songwriters coming into the scene every day, I often wonder how they will find a way to stand out. Sometimes it’s a sound or an eclectic wardrobe that catches your eye and sometimes it’s coming across an Instagram video of a couple guys sitting on a couch messing up the lines in a promo shoot. No gimmicks, no fancy giveaways, just mispronounced studio locations, made-up words and two familiar faces. Those faces were none other than Matt Chase and Chris Rogers, now known as Southerland. I knew they had something special, something different, and I wanted to know more. As luck would have it, Raised Rowdy favorites Ray Fulcher and Faren Rachels were touring the east coast and decided to bring along a special guest for a few stops. Sure enough, it was Southerland.

Believe me when I tell you, what you see in those videos is exactly what you get in real life. I got the chance to catch up with Matt and Chris before their show at Six String Grill & Stage in Foxborough, Mass last month and we talked about everything from where they grew up and how they came up with the name Southerland to the new EP and how “we’re not drinking tonight” actually means “we’ll have a Miller Lite and let’s do shots after the show.”

I loved getting to know the backstory of how Southerland came to be and I think you will too! Over the next few weeks, we’ll share their story and recap the new EP, Six String Sessions.

Raised Rowdy: Tell us about where you grew up and how you came to know and love music.

Chris: I’m from a small town outside of Athens, called Washington, Georgia. If you’re not from there, you’ve probably never heard of it. I grew up pretty close with my Grandad, uncles and cousins, all who played the guitar. So when I was about 10, I started playing as well.  I was just a kid fooling around but my mom would catch me singing and she would put a tape recorder on the back of the couch and record me all the time. She didn’t stop there either. She’d bring it in to work and show all her friends.

Chris: Yeah she sure was. So I guess it all started there. I played a little bit more once I got to college. After I graduated, I moved to Atlanta and started playing more with my brother, who was a lead guitar player, a cousin, a 15 year old girl drummer, and another cousin who played bass and we would tour around at VFW and Elk’s Lodges. We went from that to playing college bars in Athens. While doing that, I worked for a while with my uncle on his farm and then got a job in IT for about 2 years. It didn’t take me long to figure out that wasn’t what I wanted to do at all. I remember meeting with my boss for my quarterly evaluation and I’ll never forget what he said, “I feel like you just don’t want to be here.” I really didn’t and a couple months later I made up my mind and just decided to quit my job, head to Nashville, and give it a try. 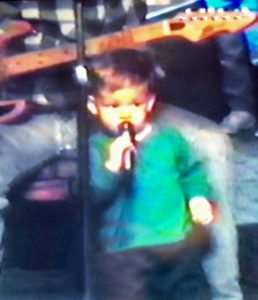 Matt: I grew up in Mt. Pleasant, South Carolina, a suburb of Charleston. And surprisingly, I did not start playing music until high school. No one in my family is musical, at all. No one plays instruments or sings. Literally the worst singers on planet Earth. My mother will not like that because she thinks she can carry a tune; sorry mom. But she convinced me to join the choir, which I did for all 4 years in high school. I also played football. So imagine going from choir practice to the football field; yeah, it wasn’t good. But I did it. I ended up buying this guitar, this little dinky guitar for like $50 bucks. 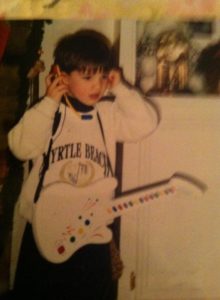 Matt: Yeah, I used that dinky guitar to write songs in my room, awful songs. I had no idea how to write to songs; it was straight up nonsense. As I was writing these terrible songs, my mom told me I should get guitar lessons. So I took these lessons for like six months and then we had to do a class show at this place in Charleston called the Windjammer. Iconic, total dive bar that’s been there since my mom was a kid. One of the owners heard me play and thought I sounded pretty good. He went on to tell me that Brantley Gilbert was playing there the following week and wanted to know if I’d be interested in opening for him. 18 years old, I was so young, but I did it. There are videos of it. I was so bad; the songs were so bad. But I absolutely fell in love with it and how it felt being on stage. I must have done something right because I ended up getting to do a bunch of shows there. I opened for Darius Rucker, the Eli Young Band and a bunch more. I’ll never forget talking to Mike Eli on the patio after the show. He told me, “If you want to do this, you have to be present to win. If you want to be a musician, you have got to go to the source. You have to go to Nashville.” So senior year, two of my friends decided we should go to CMA Fest. I convinced my mom and dad that it was a good idea to go because I was gonna apply to college at the same time. I went and I was sold. I fell in love with Nashville; so much music and so much talent right in your face. I knew I was gonna move there one way or another. I weasled my way into Nashville to the point where I got accepted at Belmont, went to Belmont to tour and by the time I had an associates degree in Criminal Justice I realized I couldn’t afford to go to Belmont University so I ended up going to MTSU and got a bachelor’s degree in communications. And now, I’m an EMT. My dad is a cop, my mom works for the sherrif’s office, all of my aunt’s and uncles are police officers. I really thought I was gonna be a police officer.

Chris: Funny story. My dad was a sherrif in my home town. I had three uncles that worked for the sherrif’s department, my sister is a parole officer, my grandad worked at the jail so we both have that common law enforcement connection too.

Matt: That’s all I knew outside of music so I thought that’s all I was ever gonna do. But then something happened…..

We’re just scratching the surface. Check back next week to hear about what happened and how they ended up where they are today. In the meantime, check out their new EP available on all platforms and be sure to follow Southerland on Instagram and Facebook.