NASHVILLE –The Wilson Brothers Band was recently named the Country Duo or Group of the Year by the Nashville Industry Music Awards (NIMA). NIMA celebrated their 13th year in presenting awards to Nashville-based acts in several categories of music including country, hip-hop, rap, pop, and jazz. 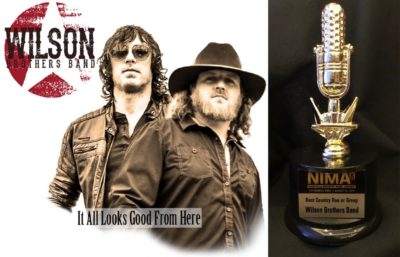 The criteria for nominations are based on board appointed industry professionals and the awards are given based solely on the artists’ fan-based voting system.

Wilson Brothers Band has been busy over the past year with extended tour dates, following a year of success with a No. 1 music video on CMT 12-Pack Countdown and a Billboard charting radio single. Chad and Kyle Wilson front the band with their blood harmony style.

“The importance of this award is that our fans are the ones who made this possible.” Kyle Wilson said. “Without them, we couldn’t do what we love to do. We do it for the fans, and they have always been faithful to show us love in return.”

The Wilson Brothers band recently released their current radio single “It All Looks Good From Here,” which has already gained tremendous traction being streamed more than 1.5 million times. Featured on CMT’s “Artist Discovery,” where fans vote on their favorite music video by artist, the song debut at No. 1 and remained there for three weeks, spending a total of seven weeks in the Top 3 of the CMT 12 Pack-Countdown.

“We are always amazed at how much our fans support us and what we are about.” Chad Wilson said. “To be able to make music that connects with people on a common level and share memorable moments every time we are on stage is truly a dream come true.”