The power of social media in today’s age is unparalleled to anything we’ve ever seen before in the music industry. Artists are able to get noticed faster and create a fan base at record speeds. We’ve all seen this in recent years; Luke Combs, HARDY, Kane Brown, the list goes on. Another artist going through that same process is Florida native Dalton Mauldin.

He first went viral in 2018 when he posted a cover video of him singing Dan + Shay’s “Tequila,” and his career has been on the incline ever since. “I really didn’t think it would get the way it is now so fast. Of course I had high hopes for my first single but I really didn’t expect all of this. I just checked today and saw that I had 140,000 monthly listeners on Spotify today and it just completely blows my mind.” He hopes to gain even more monthly listeners after adding his newest single “Blinded.” 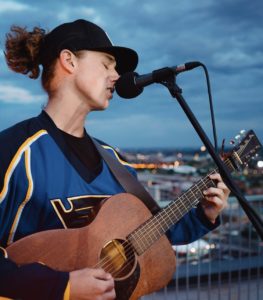 Being the predecessor to “Nights Without You,” the song that put him on the map, “Blinded” is a left of center country pop song that is upbeat and catchy, making it a very likable song. “I think it’s a very relatable song that’s been written from that hopeless romantic retrospect that after a relationship is already over, someone will change and you’ll be able to be with them again, but after a while you come to your senses and realize its not meant to be.”

“ Blinded “ out August 2nd! So excited for this!! Retweet this & click the link to pre save / pre order it for me! ♥️https://t.co/P0p1ThOIrK pic.twitter.com/XalE0eP4Nd

For now, fans can listen to “Blinded” while they anticipate his next single “Lost In The Blue.” To stay up to date with Dalton Mauldin, follow him on Instagram and Twitter @DaltonMauldin5.