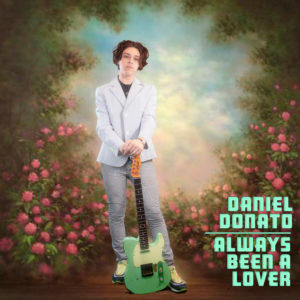 Daniel Donato is something of an anomaly. His music is a fusion of methodical guitar prowess, learned in the depth of barroom picking at an extremely young age (He started playing at Robert’s Western World early in his teenage years with Don Kelley Band) fused with other realms of music that inspires him.  He lives in the slightly off-center version of country music and if you ask Daniel that is quite alright with him. His musical talent and creativity are second to none in almost any genre but is expressly refreshing in the country music world he most closely calls home. Daniel’s music is bluesy, folky, sometimes psychedelic and undeniably country.

“Always Been A Lover” which is Daniel’s newest track is a plucky, rhythmic, Jerry Reed styled tune that accents itself with quick drum hits.  “Always Been A Lover”, as most of Daniel’s music does, leans heavily on the guitar for its feel, and what a feel it is. You can almost see the notes dancing in your head and Daniel’s fingers dancing on the strings when Daniel takes on the opening of the song.

Lyrically, Daniel touches on the story of a girl whose companionship he particularly wants to achieve. The chemistry is palpable and the feeling has to be expressed. The powerful guitar when put together with the lyrics, evoke the kind of passion you feel coming from the narrator. It is fast. It is powerful. It’s clean and true.

We dropped a mini podcast with Daniel where he talks about the song HERE on iTunes and Spotify so give that a listen. He plays an acoustic version of the track for us there as well.

Daniel’s music is built to stand the test of time. He is going to be someone you tell you kids or grandkids about. The music he is creating and the art he crafts on stage are some of the most mind and genre altering of the times we are in. Take note kids. This is not just the guitar hero for the modern age but Daniel’s writing and song-craft are quickly becoming just as vibrant.

Check out Daniel’s first podcast as well as a playlist he curated to help you find other artists that live in the same sonic realm as he does.