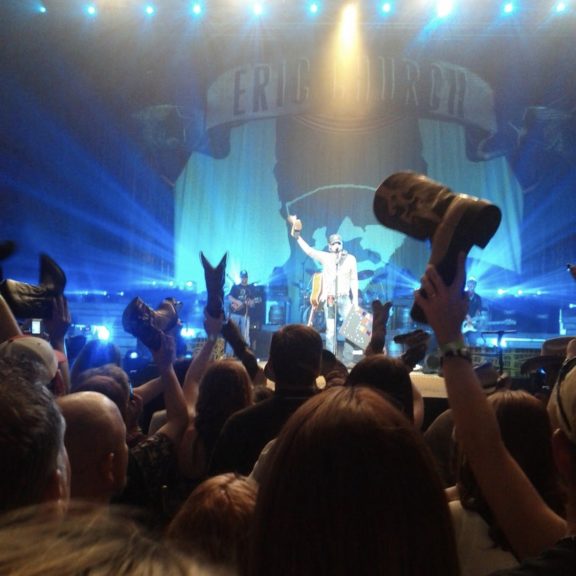 Backstage with Ben Johnson – These Boots

Ask and you shall receive….here are some of the best stories that came in from Raised Rowdy Nation.

“Justin Moore started playing ‘I Could Kick Your Ass’ and fights started breaking out everywhere. The entire concert was fighting.” – Garrett L.

“I attended the Big Valley Jamboree country music festival with my buddy.  Showed up and partied Thursday & Friday. Woke up on Saturday morning, got up and my back was feeling tight.  Figured it was from sleeping in the tent…Anyhow, started drinking again about 11 with our neighbors and by 1pm, my back wasn’t better so I ask my buddy if he thinks I can take Robaxacet even though I was drinking.  Sure he says to me!

Of course you shouldn’t; but I did.  Spent the afternoon drinking more and more eventually crawling into my tent and sleeping for nearly 10 hours, before getting up near midnight, having missed Miranda Lambert… Said fuck it and started drinking again….lol”  – Louis T.

“ So we’re coming back from drinking…about 3:30 in the morning. I was wearing a UMD cutoff t-shirt. Ironically we were camping with a bunch of football players from NDSU who were linemen. Here I am, 155lbs…they of course didn’t like my Bulldog shirt. When they saw it, they decided to grab me and light my shirt on fire…while I was wearing it. I had to rip it off and throw it in the bonfire pit and had to convince them not to throw me in with it….

Story number  started in typical beer garden fashion. We’re out playing beer darts at 2:00 in the afternoon and we’d been drinking since about 7:00am. For a while we were only playing with one dart. We had about 15 people sitting in a big circle and we could find the other two darts..we were kinda confused about where they went. Next thing you know, I look over to the left of me and one of the football players had a dart sticking out of each of his big toes…He goes down to pull one of them out and then another lineman throws the third dart and it goes straight into his hand. This guys got a dart in each of his big toes and one in his hand. Fucking drunk people man.” – Nate. S

“Winstock…a drunk dude tried to hit a chick behind me. I turned around clocked the dude and he landed on his a$$” – Kristin S.

“Funniest thing I ever seen was at Countryfest in Cadott, Wi. Some guy was passed out in his lawn chair and the people with him wrapped him with toilet paper.  He was there for 45 mins before he finally woke up and tore himself out of the paper…. He was a little pissed but he knew it was all in good fun.” – Steve D.

You showed me yours so I’ll show you mine –

We all have that festival story that sticks out in our minds. With three days of drinking and country music, something is bound to happen to every group of friends…My finest moment came at Country Jam in Eau Claire, WI.

Country Jam weekend always ends up being over my birthday weekend and we would go with a big group of my college friends. We usually camped, but this year we had all decided to get hotel rooms and shuttle to the festival grounds instead.

We woke up that morning and we drank hard. I vaguely remember the concerts that night. The next thing I really remembered was waking up in my bed in the hotel room… at that point I was actually surprised and figured I must not have been as far gone as I thought I was.

I looked over on the floor next to me and it looked a little wet…didn’t think much of it. Got up, went to the bathroom and as I was gonna crawl back in my bed, but I noticed that one of my boots had water or something coming out of the seams near the bottom.

I picked it up and…my boot was full of piss.

I was sharing a room with my friends Connor and Abby and told them what I found. Connor said, “Dude, you woke up in the middle of the night and we thought you were just pissing in the corner of the room….” Then he started singing, “These boots, have counted off many a band, getting drunk at Country Jam, and getting pissed in hotel rooms. These boots…”

The three of us cracked up…not my finest moment, but hey, at least I didn’t pee on the floor.