Check out Stephen Carey’s new single “The Way It Goes” 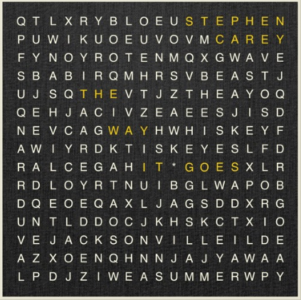 Jacksonville, Florida native, Stephen Carey has recently taken Music City and country music fans by storm with his first two singles “Summer Cool” and “Wrecks Me”. Each song has accumulated numerous streams on various platforms, continuously growing Stephen’s fan base. Now, after much anticipation, he is delivering another song that is sure to wow listeners titled “The Way It Goes.”

“The Way It Goes” is a groovy, uptempo song that details “the way it goes” during an up and down relationship when you just can’t shake that particular person.  This song really tells the tale of “breaking up, making up, and falling in love again.” Let’s face it, most people have been in Stephen’s shoes and this song gives a fun take on what is typically described as tumultuous.

When it comes to love, as Stephen sings, you really can’t try to hide it, fight it, or deny it. If it’s right, it will be something that you inevitably keep coming back to. And that’s just “the way it goes.”

We can’t wait to continue to hear new music from Stephen! With each release, we love his sound even more! Be sure to check out “The Way It Goes” and follow Stephen on his socials!