If I’m Being “Honest”, Parker McKay’s New Single is AMAZING 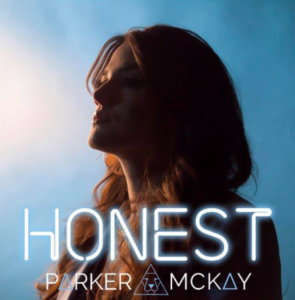 Parker McKay grew up in the Northeastern part of the U.S. listening to the likes of Sheryl Crow, John Mayer, Shania Twain, and yes, even Eminem. These different musical inspirations ranging from country to pop to rap can all be found in the unique sound that Parker brings to the table. Parker’s fresh take on country music grabs her listeners attention and motivates them to dig deeper with meaningful lyrics and powerful melodies that showcase her strong vocals.

Parker has found herself being added to CMT’s Discovery Program as well as being featured in Rolling Stone. Coupled with the fact that Parker has been opening for artists such as Rascal Flatts and Martina McBride, she is quickly becoming a name that causes people to take notice. I had the opportunity to catch Parker play at The Listening Room the last time I was in Nashville and the experience lived up to all expectations.

Parker’s latest release, “Honest”, is the perfect track to showcase all of her artistry in three minutes. “Honest” has a distinctive sound that automatically captivates the audience’s attention. With cutting lyrics that really “tells it like it is” Parker tells the story of being in a relationship that’s going south in a hurry and just not having the energy or emotion to fight for it anymore. The word choice in the lyrics create a clever rhyme scheme and vibe that will have you feeling sorry for the person on the other side of the relationship but taking Parker’s side due to her, well, honesty.

Parker describes how this song came to fruition saying, “I wrote this song with Adam James and it kind of came out of nowhere. He started playing this progression on a Wurlitzer at the beginning of a write, and I had just been listening to a bunch of rap on the way over and started ad-libbing some rapid phrases over it. The word ‘honest’ came out and we ran with it. This is one of my favorite things I’ve ever written and it was a turning point for me.”

I, for one, am obsessed with this new song and have had it on repeat for days. What can I say? “I’m just being honest!”

Don’t forget to follow Parker on her social media: