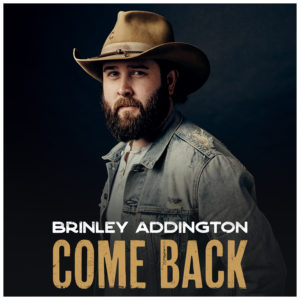 Following up one of 2018’s best projects (in our minds, anyway…) might be a chore for some. For Brinley Addington, though, he simply just kept the momentum going.

With his most recent EP, entitled “Songs From a Bar”, Addington showed that he planned to keep it country. The newest single “Come Back” is just a continuation of that sound.

With this song, Addington said he wanted to connect to listeners with a common theme.

“We’ve all heard, ‘If you love someone, set them free.” This song is about loving someone enough to let them go do whatever they need to do while also letting them know that wherever their journey takes them, how long it takes or what changes, that you’ll be there if they ever want to come back,” he said.

Addington compared the song’s premise to Trace Adkins’ smash hit “Every Light in the House is On”, and that couldn’t be more accurate. The song has the potential to reach the same audience with not only the song’s lyrics, but it’s true country sound.

“I feel like most guys are too afraid to be that vulnerable in a song, but those have always been my favorite kinds of songs,” he said.

For anyone who feels like they’re holding someone back from their dreams, give this song a listen. You will not be disappointed.