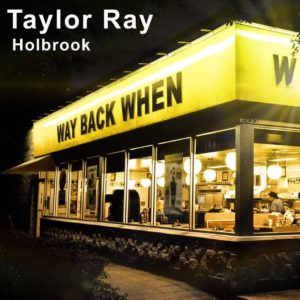 Very few country music artists have ever been really successful as independents. Aaron Watson, Corey Smith and Cody Johnson come to mind to that short list of standouts. Add to that list Taylor Ray Holbrook.

Holbrook is about to celebrate a certified gold record, but instead of thinking about the future, he’s released a serious banger reminiscent of the days before his success.

“I’ve been really reflecting on these past five years since I started my music career and appreciating all of the moments that lead me to this point,” he said. “But it’s my life before all of this that I find myself truly reminiscing on and wanting to do again.”

The song “Way Back When” that released today gives us a glimpse into the way Taylor Ray grew up.

“There was nothing like ridin’ around back roads, nowhere to be so we’re driving slow/Playing old songs, and we sing along.”

Life for him was definitely simpler then.

“My life is so much more complex now than it once was, before the money and the popularity, he said. “That carefree state of mind, just hanging with my friends, was true freedom.”

The point of this one that he co-wrote with Ryan Miller and the song’s producer Jason Sciullo, was to give his fans a chance to see into his past and realize he wasn’t any different than they are. But also to make them realize what they have before it’s gone.

“I want to give my fans a melody to bring back those memories while at the same time, motivate them to soak up and appreciate the moments they are experiencing, right now,” he said.

This one is definitely the country-pop-rap style we’ve come to hear from him, but this one will definitely be cranked up with the windows down this summer.