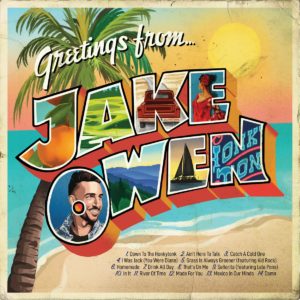 With summer approaching, it’s only fair that we get a new Jake Owen album to get us ready. Owen’s new 14-song album, Greetings From…Jake’, is loaded with feel good songs that will have you downing coronas in no time. The album is anchored by the popular singles “I Was Jack (You Were Diane)” and “Down to the Honkytonk”. One thing that stands out about this album is the all-star songwriting cast. The collaboration between great young songwriters like Drew Parker and Jaren Johnston and seasoned veterans, like Craig Weisman and Brett James, gives the album an overall great sound. Now to the songs…

A classic feel good song. Written by Laura Veltz, Benjy Davis, and Matt Dragstrem, this one is a personal favorite. This song is just very Jake Owen. The smooth sounds and good lyrics can easily set the tone for a good time.

Owen adds a little Spanish twist to this song he does with internet star Lele Pons. Written by Nolan Sipe, Nathan Spicer and Ben Caver, the song creatively adds some Spanish words in this yet again, smooth and catchy tune.

Jake Owen spits some truth when he says, “You can’t drink all day if you don’t start in the morning.” Another great summer song is perfect for the boat or the beach. Brian Kelley added some FGL flavor to this song that he co-wrote with Daniel Ross, Ernest K. Smith and Josh Miller.

Owen gets a little more country in this song, co-written by our friend Drew Parker. Also written by the great Bobby Pinson, Jared Mullins, and Ben Goldsmith, “Homemade” takes you back to hometowns and momma. This song complements the album very well because it adds a strong COUNTRY feel to it.

We could highlight literally every song on this project, it is probably his best album yet. So find some sun, grab a cold one, and crank up this album you won’t be skipping any of the 14 tracks.

Jake Owen continues his tour this spring and beyond. Make sure to see him out on the road and hear some of the new material!