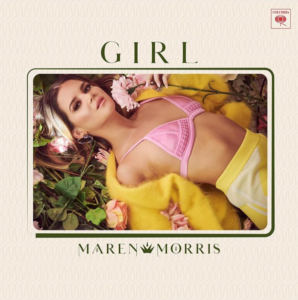 With so many discussions this day in age about what makes an artist, album, or single release country, Maren Morris offers insight on the subject saying, “a banjo or fiddle doesn’t make a country song, it’s the core-cutting truth that does.” Core cutting truth that can be found on her latest album, Girl.

Three years after the release of Hero, Maren Morris’s follow up album is finally here. The fourteen track project released today, beating all expectations. Maren showcases her artistry through her outstanding vocals and heartfelt lyrics on each track, self describing the work as it being, “all the ugly, all the things that shouldn’t be said, and all the things that SHOULD be said.” In other words, this album will make you have ALL the feels.

Maren not only co-wrote each of the fourteen songs, but also co-produced the album with busbee and Greg Kurstin. The album features some star studded collaborations with artists Brandi Carlile on “Common” and THE Brothers Osborne on “All My Favorite People” which was coincidentally co-penned by Maren and her hubby Ryan Hurd.

I think the beauty of this record is that Maren’s sound and style is genreless and can’t be put into a box. One track such as “A Song for Everything” is reminiscent of her country smash “My Church”, speaking of music taking you back to your fondest memories with Springsteen and Coldplay while another like “RSVP” sounds like it could fit right in on an R&B radio channel with it’s progressive loop. What’s constant through the whole album is that distinctly Maren sound that has been a steady core throughout all of her projects.

Ultimately, Maren shows her range and her “Girl” power with this record, showing the world that women really can accomplish anything by releasing her sophomore album on International Women’s Day.