HomeCountry MusicMatt Rogers new single “Heres to Something” will have you celebrating all summer long!

Matt Rogers new single “Heres to Something” will have you celebrating all summer long!

The first time we introduced you to doctor turned singer, Matt Rogers, we premiered his highly introspective video for the song “Richest Place On Earth”. The inspiration for the song came from Matt pulling over to the side of the road for a funeral procession and it still gives me chills to this day.  Watch it here.

As we creep towards summer and start to escape from the winter doldrums, Matt drops his new single on us and writes a prescription that requires no co-pay.  “Here’s to Something” is an escape and a celebration stitched together as tightly as your grandmothers passed down afghan, draped over your favorite rocking chair. Matt co-wrote the glass raising song with friend and front man of the Alabama band The Vegabonds, Daniel Allen. Matt describes the story behind it as “We all have some of those friends where you know tomorrow I’ll have a story and be on the struggle bus, but tonight it’s worth it. It’s really about being thankful for where you are at, and enjoying the little things.”

It’s not a well hidden secret that we don’t need much inspiration to raise our glasses over here at Raised Rowdy,  but if you ever do Matt gives more eloquent inspiration than we ever could:

“If you have to find a “good” reason, then you need this song. It’s about letting go from time to time. It’s being present in a moment. The spontaneity of a “Here’s To Something” night is what makes them that much better.”

We’ve all experienced our own “Here’s To Something” moments, whether it be weddings, promotions, graduations, or any day of the week that ends in…..day.  Pressed for his most recent, Matt tells us the story of a night that turned into a reason to set ’em up and throw ’em down. “A week or so ago I was in town on a weekend and went to a Preds game on that Sunday for the 11am game. We met some folks in the Lexus lounge that were pretty cool, and we were going to maybe stay on Broadway for one of those after game drinks….We all know how quick they multiply, by last call we had met tons of new friends from all over that were visiting Nashville, and I even made an appearance or two on stages where friends were playing. Of course with a finale finish to the night with a performance of “Wanted Dead Or Alive” at Ms. Kelli’s Karoke Bar and a Cook-Out tray.”
Make sure you catch Matt out on his Here’s To Something Tour this spring and get out and see him on one of his three dates with Rebel Union at the end of March! 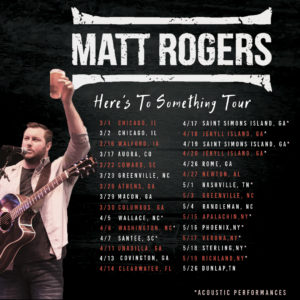