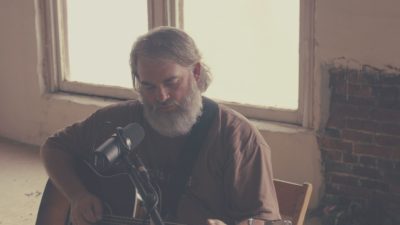 If you had to explain what style of music Raised Rowdy looked for to make its own, you would get a concoction of these qualities: Gritty, authentic voice, progressive guitar licks, heartfelt songwriting and an original sound.  Dave Ernst fits every single one of those qualities with his debut release Hickory Switch. Is it country? Americana? Indie Rock? Alt Country?  The answer is we don’t really care because what it definitely is, is great music.  That is what we search for on a daily basis and hope to bring to you in any form we see appropriate.

Dave acquired his musical roots growing up in Louisville, Kentucky, but spent many summers a little over an hour away in Marion County. Ernst got his share of culture in all its forms from splitting time in both areas. Both the southern country charm and the lure of music comes genuinely for Ernst. His mother sang in the gospel trio, The Treble Tones in the 60’s and 70’s and his grandfather was the guitarist in a traveling country “orchestra” (as he called it) for over 20 years. Ernst’s mother bought him his first guitar as a teenager and he set off to learn every R.E.M. song he could–an influence you can still hear in his music to this day (Driver 8 is an R.E.M. cover).

Ernst’s love of music led him to many local bands growing up until finally being asked to join major-label band Big Wheel, fronted by ex-Squirrel Bait singer Peter Searcy then later joining Searcy in forming Starbilly. But sometimes good things fade and life gets in the way. After the ends of these bands Ernst played along with a few more projects before heading out to make his own project. The result is what we have here for you today Dave Ernst & the Early Favorites.  After demoing in 2017, they signed to Eastwood Records working on what has become Hickory Switch.

The album, produced by Peter Searcy (Squirrel Bait) and mixed by Ken Coomer (Wilco, Uncle Tupelo), takes parts of their Kentucky roots and infuses them with the musical stylings they each developed over their careers. The hard working guitars, the gritty vocals, all those things we look for, with Ernst’s vocals, gives this project a feel that we see gaining traction with your listening ears. At the end of the day, Ernst and the band made something they can be proud of and that will stand the test of time.

“We are all having a blast,” says Ernst, “At the end of the day we just want to have a great time and make some music that makes us proud and has meaning to those listening.” After your first listen you will see that Dave succeeded in his journey. The journey to play his music and for people like us to truly listen.

So let us know what you think.