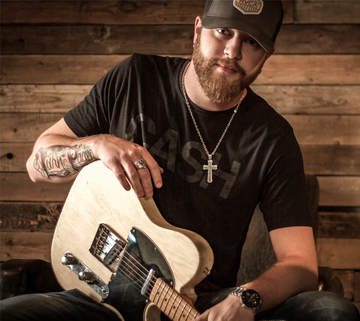 By Chris Yow
Staff Writer; Once drank a quart of moonshine with JB

Jacob Bryant is bigger than you expect. I walked into The Basement East in Nashville where he was about to do his soundcheck for his January 30 show with Koe Wetzel, found my way to the green room and when the door opened, he was standing there — all 6-foot-4 of him — with his long, reddish-brown beard.

We shook hands, firmly and with a smile he greeted me, “Hey, man. It’s good to see you.” I felt like he meant it. He’s genuine like that, and he’s always maintained that his music is just real-life stories being told with rhythm and music behind them.

This week, Jacob will release his first full-length album after previously releasing five EPs over the course of several years. This album, Jacob says, is something he’s really wanted to be able to do for a long time.

“For the longest time, we were just trying to put out content for the fans. I hadn’t released anything but singles and EPs,” he said. “We started brainstorming on how we can keep content in the market and keep the fans happy, but after a while I wanted to take a year or more to put together a piece of art that I’m proud of.”

He said his fans got a little antsy over that time period, but in the end it was worth it.

“We spent a lot of time going through songs, writing songs and put together a collective of music that represents me,” he added.

While the majority of his released music over the last few years has been consistent with his sound — the traditional country, mixed with rock sound — this has a little bit of variety.

“I like all types of music, not just traditional or just modern or southern rock,” he said. “This is diverse, and there is something on it for everybody.”

The difference between this and his previous releases?

“The passion that was put into this and the time,” he said. “We took the time to release something we were all proud to put out.”

When he talks about that passion, it’s obvious as soon as the first song plays on the record. It’s the same song he’s opened every show I’ve seen with, called “More Than One Year” which was co-written and previously released by Eric Lee Beddingfield. This song is 100 percent classic JB, though, and it sets the tone for the excitement you’re sure to have throughout the entirety of the record.

He actually released this song as a single, along with “25 in Jail,” “Pour Whiskey on My Grave” and “Best Part of Me is You” to digital outlets already. “More Than One Year” has more than 745,000 streams to date on Spotify right now.

The aforementioned “25 in Jail” — a tribute to Merle Haggard’s “Mama Tried” — and “Best Part of Me is You” come next. “Best Part” is closing in on 2 million Spotify streams. From there, the rest of the record, sans track 6 (“Pour Whiskey on My Grave”), is essentially brand new, never before heard music, including a full band version of the acoustic hit “Sometimes I Pray”.

Fans of traditional country music will love “Pain Pain” and “When I Get On a Roll,” while fans of JB will love the southern rock of “Wrong Way Home.” He shows his more tender side in “Bring You Back” and “One More Night With You.”

The bottom line here is that you should definitely be listening to this entire record. You won’t be disappointed at all.

Catch Jacob out on tour with Cody Johnson and Koe Wetzel, as well as solo dates.