HomeCountry MusicWith his arsenal of guitar licks, gravely voice and songwriting prowess Kenton Bryant is going to turn some heads with “Following My Broken Heart””

With his arsenal of guitar licks, gravely voice and songwriting prowess Kenton Bryant is going to turn some heads with “Following My Broken Heart”” 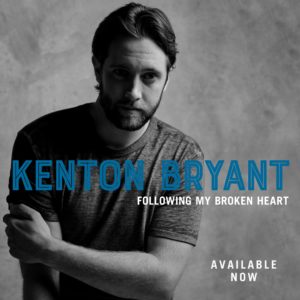 We have been fans of Kenton Bryant since we first heard his gravely voice on a YouTube video a fan shot at writers round he was playing.  You could even tell from just that short, not so clear video that this guy just had IT.  His first EP dropped and it was one of our top EPs of 2018. A mix of rock guitar that Kenton is known for, mixed with well chosen, catchy country lyrics, put it on repeat in Rowdy land for a long time.

But that my friends was 2018, and Country music much like the rest of the world, is a what have you done for me lately type of business. Kenton did not wait long to get us some more music so we could get to know him a little bit better.

He released his new single “Following My Broken Heart” to kick his 2019 off on the right foot. Co-written with some heavy hitting songwriters – Jonathan Singleton, Brandon Ratcliffe and the late Andrew Dorff – Kenton really landed a gem with this one.

“Following My Broken Heart is my best description of tracing some old lines from a recent relationship and hoping it’ll bring some closure. Truthfully, most of the time it’s the opposite. We have all more than likely been in that spot, and I felt like this song was something I needed to get off my chest. I’m damn proud of every bit of Following My Broken Heart from start to finish, and I can’t wait to let the world hear it.”

We are proud to help bring this track to you. It is just a matter of time before a record deal and radio play are in the the works for Kenton.  The writing really is on the wall.
Kenton plans to release songs regularly this year so we won’t be waiting long for even more of his tracks.  Until then, listen to “Following My Broken Heart” and make sure to keep up with Kenton on INSTAGRAM.