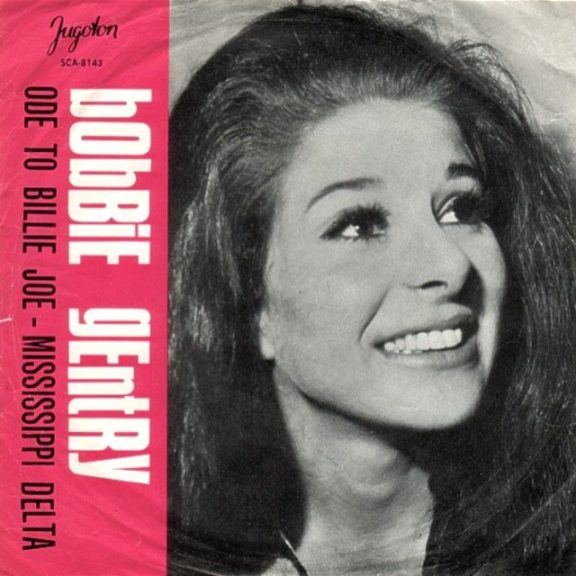 The other side of Bobbie Gentry’s “Ode to Billie Joe”

Everybody knows about Billie Joe McAllister and his suicide jump from the Tallahatchie Bridge, but did you know his story that quickly became a massive success wasn't even supposed to be a single?

Everybody knows about Billie Joe McAllister and his suicide jump from the Tallahatchie Bridge, but did you know his story that quickly became a massive success wasn’t even supposed to be a single?

Originally, Bobbie Gentry’s raspy blues-type tune “Mississippi Delta” was to be the A-side, while “Ode to Billie Joe” was planned for the B-side. Thank God someone at Capitol Records decided that was a bad idea.

The other side of the record was still “Mississippi Delta,” they just switched the letters. One of the most sultry voices in pop music, Bobbie Gentry was relatively unknown. “Ode to Billie Joe” was her first release as a solo artist. She’d grown up in Chickasaw County, Mississippi, raised by her grandparents on a farm. So, when she sang about the “Mississippi Delta” she was singing about herself. A storyteller from early childhood, Bobbie Gentry (born Roberta Lee Streeter) was one of the most gifted pop singer-songwriters in Los Angeles when she was first found by Capitol execs.

The song “Mississippi Delta” is completely opposite from the soft, storytelling version of its flip-side. It starts with heavy electric guitar, something you might have heard from bands like Creedence Clearwater Revival at the time. Gentry’s raspy voice then spells out “M-I-double S-I-double S-I-double P-I” before blowing you away with the vocals on the first verse. It’s no wonder her producers thought this would be a great fit for her first single. About the only thing the two songs have in common is the setting in Mississippi.

The entire song, though, is nothing but moments in time strung together that only people in the South would understand. Now, understand that in the decade before Bobbie showed up, Elvis made Mississippi, Memphis and the South really popular. Well, except for Alabama, where the Civil Rights activists were bringing national attention. This is 1967 Los Angeles, and Elvis hadn’t made his ’68 Comeback Special yet, and he’d actually been sort of forgotten by the mainstream, if you can believe that. So, putting a white girl on an album cover singing a soulful rock song was probably not what record executives were looking to do. But they had just lost a soulful rock singer from their roster — Aretha Franklin.

Franklin signed with Atlantic and started recording in Muscle Shoals with their Muscle Shoals Rhythm Section (you know them as The Swampers) at FAME Studios. Columbia made the decision to scrap “Mississippi Delta” as the single and go with the more sultry “Ode to Billie Joe”. What a choice they made.

Since we’re talking about songs you’ve never heard from Bobbie Gentry, and I just mentioned FAME Studios in Muscle Shoals, Alabama, let’s talk a little about what might actually rival “Ode” in popularity — especially among people our age.

FAME Studio producer Rick Hall got together with Bobbie and famously asked her if she had another “Billie Joe” in her. She replied that she’d try. The song that came from that was her 1969 single entitled, “Fancy”. Yes, it’s the same song you thought Reba McEntire wrote. The song barely made the Top 30 in either pop or country, and is probably the most underwhelming performance of a song of that caliber that I’ve ever seen.

If you haven’t heard Bobbie Gentry’s “Fancy” or “Mississippi Delta”, you should most certainly take a few moments of your time and listen to one of the greatest voices in music history tell some of the best stories you’ve ever heard. Oh, yeah, throw in “Bugs” too. It’s a sure-fire way to get you thinking about why winter isn’t all that bad.