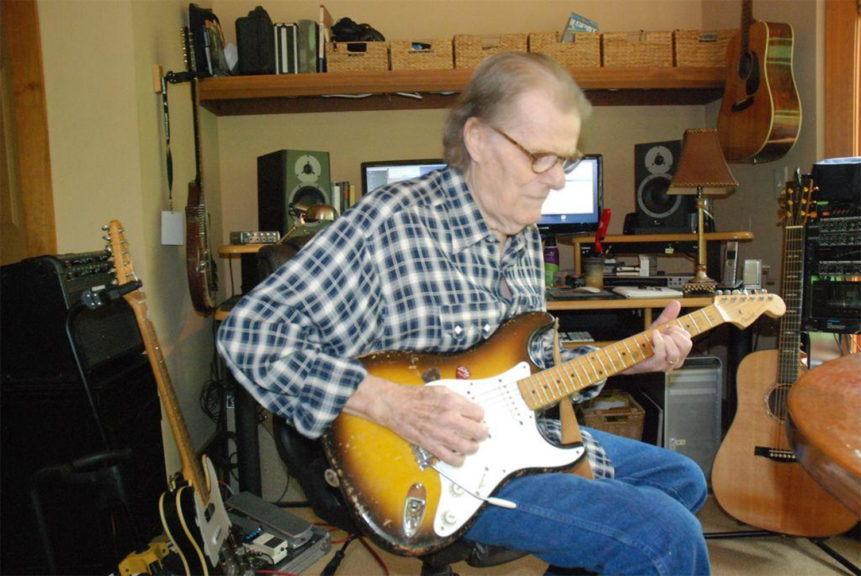 Reggie Young, the most recorded studio musician in history, has died. Young played alongside Elvis, Willie and Waylon, Travis Tritt and really more stars than we could ever list.

The following story was published in The Advertiser News of Spring Hill and Thompson’s Station in February 2018.

There’s an old saying, “the carpenter’s house is never finished.”

That a carpenter spends so much time and effort giving the best of himself to others’ homes, he might have so much work that he barely has the time, inclination or energy to undertake his own projects.

That saying might also be analogous to the career of another sort of woodworker, guitarist Reggie Young of Leiper’s Fork. As a first-call session guitarist, Young has contributed his prolific and stellar guitar work to more than 100 Top 40 hits that span several decades.

Perhaps it’s fitting that only now this musical craftsman is releasing his first solo album, “Forever Young” on the UK label, Ace Records.

And all at the age of 80 years young.

If his is a name that’s not instantly recognizable to some, that understandable. You already know the tunes. His guitar tracks shine through a myriad of hits that should jar more than a few musical memories. These include “In the Ghetto” and “Suspicious Minds” by Elvis Presley, “Sweet Caroline” by Neil Diamond, Dobie Gray’s “Drift Away,” Dusty Springfield’s “Son of a Preacher Man,” and countless others.

Young was born in Carruthersville, Missouri and grew up in Osceola, Arkansas. Inspired by his father, 14, Young started playing the guitar.

By the age of 15, Young and family moved to Memphis, where his distinctive rhythm and blues-inflected playing style was nurtured and honed. By the age of 19, he was performing professionally with rockabilly outfit Eddie and The Stompers who garnered a hit in 1956 with “Rockin’ Daddy.”

In 1972, Young made the move to the Nashville area where he’d worked with artists such as Merle Haggard, George Strait, Willie Nelson and Waylon Jennings.

We caught up with Young at his neat-as-a-pin home studio. So what took so long?

“Well, I was always working. I was so busy. There wasn’t time off. I’d go to sessions and especially when I’d first get there, I’m tuning up and noodling around and musicians would say, ‘what’s that you’re playing?’ and I’d say, ’I don’t know, I’m just noodling around, tuning, and they’d say, ’you ought to record that,” Young said.

Over the years, the musical ideas accumulated but so did the session calls. A solo album wasn’t something that fit Young’s overtime schedule.

“I just never really had that time to do that,” Young said.

His work was so prolific that when asked if he had any idea of how many sessions he had played over the decades, he responded with a long laugh and a short answer.

“No,” Young said. “It would have to be in the thousands.”

Young did keep detailed records of each and every session in log books, which he still retains. A partial reason was entirely practical: to make certain that he was paid.

Young recalled Elvis Presley’s entrance into Memphis’ American Sound Studios where the sessions for “Suspicious Minds” and “In the Ghetto” were cut.

“When he walked in, we all kind of backed up a step and said, ‘whew, that’s the King.’ He had that charisma about him,” Young said.

Young also recalled his time spent with Jerry Lee Lewis. Was being around Lewis as wild as has been portrayed?

Given that he has more time available these days, the recording of “Forever Young” was still somewhat a daunting task. Young underwent heart surgery two years ago and also undergoes rehab in order to keep his “chops” up to the cut and to be able to perform his solo material live.

Recording of the tracks commenced “two or three years ago,” setting aside bonus track “Exit 209.”

The bonus track references the famous exit for Nashville’s Lower Broadway and is reprised from “Nashville Guitars,” released in 2000.

“Nashville Guitars” was a compilation of Nashville session guitarists, where truly, Young’s track is a standout not only for its catchy smooth melodicism, but its Memphis R&B style which stands in sharp contrast to the trebly staccato chicken-pickin’ style of the other contributions.

Regarding “Forever Young,” the album goes down as smooth as anyone with even the slightest familiarity with his prior work would come to expect from such a fount of melodic guitar work. What’s on display here bristles with more hooks than a Bass Pro Shop.

Opening track “Coming Home to Leiper’s Fork” sets the tone for the rest of the CD with its assembly of fine-crafted finger-picked chord sequences and wide chord voicings that invoke a nostalgically melodic sentimentality of not only the area, but another era, and all without becoming maudlin.

Another track, “Seagrove Place,” similarly references another place familiar to many, the beach area along Route 30A near Destin, Florida.

“It might have been written down there,” Young said.

“Memphis Grease,” for comparison’s sake, recalls in part the Classics IV 1967 hit, “Spooky” but is at the same time, its own composition.

“You don’t hear that kind of music anymore, Young said.

“Jennifer” is a dedication to Young’s wife, a classically-trained cellist who contributed cello to the track.

“He wrote it for me. When we first started dating, he was all nervous one day. We’d met, gosh, almost 15 years ago. I told him that when you put it on this record, you don’t have to call it ‘Jennifer.’ He said, ‘nope, that’s the name of it.’ He arranged the strings and I just played the cello,” Jennifer Young said.

Young used a device, a volume pedal, which manipulates the volume of the guitar signal via a foot pedal in order to emulate the sound of a violin.

Despite some of the jazzier inflections on “Forever Young,” Young denied any conscious and deliberate jazz influence, instead citing his carved-in-stone Memphis influence as the secret of his half-century success and the source of his melodic sensibilities.

“The first big [Nashville] session I played was Dobie Gray – ‘Drift Away.’ So that’s what I played in Memphis and then a lot of the country artists wanted that guitar player that played on ‘Drift Away.’ Memphis was sort of in the middle of Nashville and the delta blues, so it’s a combination of the two. When I moved here in 1972, I never changed my style of playing. I didn’t know how to.” Young said.