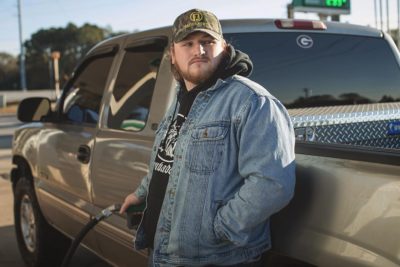 Multi genre accessibility. Jobe crosses the lines many folks try to keep firm in country music. Take one listen to his music and your mind will be trekking to multiple subgenres of music to classify his sound.  This is what makes Jobe‘s style so unique. It is very personal to his music and part of what makes it great. He fits as well in mainstream country as he does in southern rock or red dirt. It’s rare to find an artist that can be embraced by all three of these fan bases, but Jobe has found a way to pull it off.

His voice. Come on, have you heard this ole boy sing? His voice will have you weak in the knees after the first chorus and keep you there the whole playlist/live show. Vocal talent like this does not come around often and when you find it, you should be ready to hear it played across your airwaves frequently. That time is coming for Jobe very soon.

The live show. Jobe and the band he has assembled can take over a room. It’s wild to experience this, whether it be a crowd of 40, a packed Whiskey Jam stage or opening for another bad ass, his friend Luke Combs. Jobe‘s dedication and status as a road warrior has helped him and his band really come into their own. After just one show, you will be scouring his tour dates to see when you can get to another show.

The songs. Jobe‘s EP is phenomenal. No ifs, ands or buts about it.But that is just the start of it, he has so many more top end songs that are unreleased (just check out YouTube or even our Instagram TV to find more) . Since moving to Nashville, Jobe has been in some really talent rich writing rooms and it’s paying off in spades right now. With so many new songs and more being written all the time. This is just another reason to see his live show, to catch the new stuff.

Jobe is the right mix of humble and confident. We have gotten the chance to get to know Jobe through our coverage of his music and he’s honestly one of our favorite people in Nashville. He’s not the most talkative guy when you first meet him, but what he does say always even when he is getting to know you has meaning and purpose. He’s also a hilarious  guy when he is in a comfortable situation. BUT when Jobe hits the stage or talks about his music, something happens, you can see the confidence and emotion flowing through him. He really pours his heart out on stage and it’s really amazing to see.

These 5 reasons and so many more has Jobe‘s star shining oh so brightly heading into 2019. If you have to have a horse in the country music race, Jobe is one of the absolute best bets to turn 2019 into his year. We wish him all the luck in the world, but honestly he doesn’t need it. He has loads of talent and the drive to work for what he wants to achieve. For Jobe that goal starts with making great music and getting it to the people. So get out to a show we guarantee you won’t regret it.

Still don’t believe us yet? Watch these videos and you will see the light.