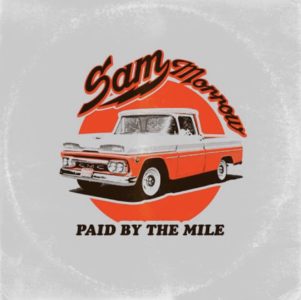 In an age when so many “radio play” carrots are being dangled in front of artists, at the expense of their identity or integrity, Sam Morrow continues to push the envelope of creativity with his brand of country music. The Los Angeles based, Texas native  infuses soul and funk with traditional and Americana undertones. Sam released his album Concrete and Mud earlier this year and it has earned him many spots on “artists to watch” lists.  His rise on the Americana charts following the release was a surprise to no one, especially here at Raised Rowdy, as we wowed at his originality and soulful voice. Drawing inspiration from a variety of genres and artists, Concrete and Mud is one of the most ambitious offerings released this year.

In his newest single “Paid By The Mile” Sam laments at the cards he’s been dealt while offering a variety of opportunities he could provide if the hard luck only paid out better. This song does not come off as your stereotypical depressing country song though.  This isn’t a slow, sappy drawn out heartbreak ballad searching for a lover, a truck or a dog.  Like many good songwriters are able to do, Sam masks the downtrodden travels with an upbeat tempo. He uses his funk driven stylings of California country to get you to groove along and not be brought down into the bottom of a bottle.

“If I had a silver dollar, for each night I could not sleep, I’d pay the tab for every man that’s ever had to face defeat.”

Like an outcast wearing a big enough grin to cover up all of life’s sins, Paid By The Mile keeps the sun shining as the night tries to steal it away.  A lesson in determination, hell bent on turning pitfalls into windfalls.