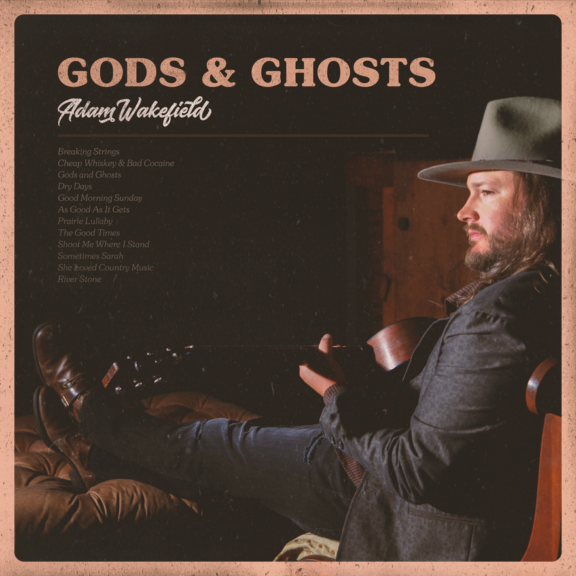 Adam Wakefield is more than just a voice: New album Gods and Ghosts shows his fervent devotion to the lyrics

Nick Tressler
Raised Rowdy Founder just trying to get by with a little left over for some cigarettes. 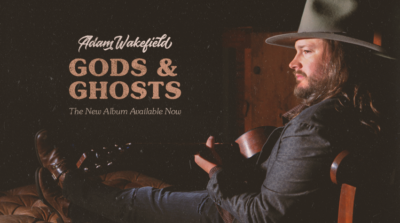 Average Joes Entertainment recording artist, Adam Wakefield, released his debut, 12-track, full-length album, “Gods & Ghosts,” November 30, 2018. Produced by Wakefield and Scotty Murray, “Gods & Ghosts” is available now and you are going to want to get it as soon as possible.

Adam took some time to answer a few questions for us.  Check out his responses and then get right into the lyric driven music!

Tell us about growing up in New Hampshire. What about your upbringing fostered your creativity and musical focus?
I grew up poor in the sticks. All we had was a piano so it was really all I had to do except fish and mess around in the woods. My parents were both 60’s kids so they had great taste in music. We used to listen to records in the kitchen every morning. Mom sang, Dad played guitar. They have supported my musical journey since I was 4. My mom used to drive me an hour each way once a week to take me to piano lessons.

Tell us a little about how you got on Average Joe’s record label?
My buddy Bryn who works in their art department told me they were looking for artists and eventually got me setup with a meeting. I went in and played some tunes on and they seemed to dig it. The rest is history.

In that same vein it seems Average Joe’s maybe more than any other label we can think of, let’s their artists have the ability to be who they are and make the music they want to make. Tell us about this process compared to making other projects in the past.
They’ve been so great. They trust me implicitly with the music side of things. When people are truly invested in your talent they trust you to produce the best thing you can. The music I put out before Gods and Ghosts was good but song choice and production was somewhat under scrutiny of my team at the time. I started recording this under the radar first so when I brought it to Average Joe’s it already had a direction. I told them I thought it was the best music I’ve got and they trusted me.

What do you think this project says about who you are musically and what fans can come to expect from you?
What I’m hoping to do with this record is prove myself as a songwriter. It’s tough after coming off a show like The Voice because all people recognize you for is your singing. Learning to sing is just a matter of practice and time. Writing a song is something completely different. You have to have something to say and have an original way to say it.

A lot of the songs on this project are solo writes. Tell us what makes this style of writing so meaningful for you?
Writing songs by yourself can be tough because you can fall into the same old melodies and chord changes you always use but my favorite thing about writing by myself is I can just keep an idea rolling around in my head and write it one line at a time if I want.

Your voice is one of the most soulful in country music. We would compare it in the same styling as Chris Stapleton, Drake White and Dave Kennedy. What musical influences made you the artist you are today and how have they changed through your life?
Dave Kennedy, that’s great you guys mention him. He’s a beast. I’ve always been a musician first and foremost, so my musical influences are all over the map. I grew up learning jazz piano. I studied Afro-Cuban music in college. Once I figured out I couldn’t cut it as a Jazz dude I started delving into roots music and songwriting.

When did you make you first pilgrimage to Nashville and when did you know it was a place you needed to be to pursue your musical dream?
I went there with my girlfriend about 6 years ago to meet with some publishers. First time I visited I realized that I was wasting my time in Baltimore. I loved my band but there just aren’t labels/publishers/booking agencies in Baltimore. For about 6 months before I moved to Nashville I just kept thinking about the potential I had if I moved there and if I didn’t move there how much I would kick myself later.

Where can people see you on the road and what can people expect to see at an Adam Wakefield live show?
I’m pretty much all over the place right now you can just check my touring schedule. I try to keep my live shows fresh so I’m always changing it up. Sometimes I play keys, sometimes I play acoustic guitar or electric. I like to feature the songwriting but we jam out sometimes too. The priority is to make sure the band and the fans are having fun.

You can check out Adam‘s newest album Gods & Ghosts wherever you download your music. Go get it now, you can thank us later