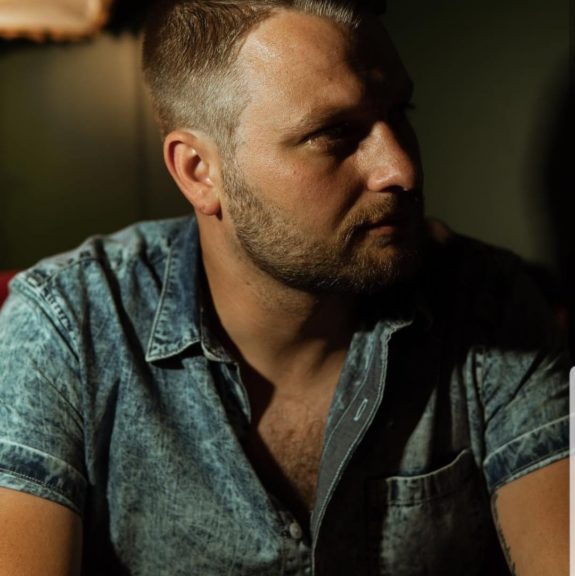 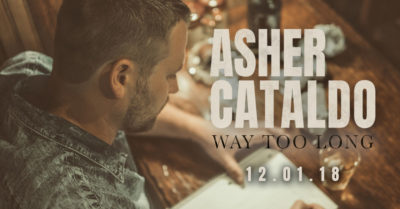 Asher Cataldo is not your run of the mill country singer.  His musical styling falls somewhere between Bob Dylan and a voice you would find on mainstream country radio. Asher’s musical roots come from a background of songwriting, having songs cut by artists like Zach Donegan and Tayler Montgomery (ex-lead singer of Monty Hill).

After years of writing, his debut project Way Too Long gives you a hint of the diversity of his musical influences. This EP has tracks ranging from his former background in rapping on “This is How it all Goes Down” to the more traditional country styles of “Saved Me” and lots in between.

Asher met his producer, Alejandro Medina during a co-write. They immediately had a connection. However, they never knew it would lead where it has with them collaborating on Asher’s debut project. Asher and Alejandro co-produced songs for Zach Donegan’s EP. At some point during a break in their work Asher played one of his originals. That is when Alejandro told him “If you had more of those we could make a great album”. Asher responded that he had a lot more where that came from.

Asher never really thought about working on his own project since he mostly considered himself a songwriter. With the encouragement of his co-writers, friends and girlfriend, along with the desire to get his songs heard by more ears he decided to move forward with the project. Some tracks were over 10 years old and some were as new as a few days old.

Asher gathered numerous songs that he thought were somewhat overlooked in his writing catalog to make this project happen. Alejandro and Asher acquired an all star cast of contributors into the mix bringing this project to life.  Alejandro Medina himself on bass, Ben Miller on all things strings (guitar, mandolin, banjo, and the dobro), Justin Abraham on the drums and Stu Stapleton on the keys. Vocal support came from Ryan Nelson and Haley Stevens.

Haley explains how she got involved in the project, “Alejandro Medina played me demos of his (Asher’s) songs one day while we were shooting for a Sweet Leah project and I was wildly impressed. I was flattered to be included as not only backing vocal, but as a designer for his album artwork”

Asher gave us a rundown on each of the songs on the new EP and what they mean to him.  Think of this as a rundown similar to what you would get at a writers round. This is each song’s story.

“This is How it All Goes Down”

So when it came down to recording we started with one of my more popular songs “This is How it All Goes Down” which originally had Tayler Montgomery singing the chorus on the acoustic version but Tayler took a break from singing to focus on life. So I was lucky enough to get the extremely talented Ryan Nelson to replace him and if y’all haven’t heard this guy you need to check him out! Big thanks to Ryan!

Now this song just hit me one morning while I was drinking coffee and listening to some Jason Isbell. I’ve always been fascinated by his lyrics, choice of words and his story telling. I always wanted to write a song like that and in a few short minutes I had it. Now I’ve wrote songs in less than 10 minutes before, but they always fell short or lacked in some way but this one stuck with me and I’m so glad it did. It slowly became one of my favorites and having Haley Stevens singing the harmonies set it off in a way I couldn’t believe! Thank you, Haley, for making this song a hit!

This song means a lot to me being I normally don’t co-write my own songs. I normally write them by myself but with this particular one I had an unexpected co-write from my brother Josiah Cataldo. He doesn’t play or write music but is a very big influence and supporter of my musical journey. We sat on his back porch one afternoon just playing around and came up with this beautiful story about a musician who was on the road traveling playing music when he met a girl in Arkansas who wanted to travel with him. She spoke of her ex-lover who lived in the Carolinas, but also wanted to start a life with the singer in Nashville (where the traveling took them). One day after playing he came home to find she left to go find her love and he stayed to pursue his love for music.

Now this song I feel like I poured my heart into and gave more of me then I normally would with my music. I was kind of nervous to even record it. This song was more of a poem to my girlfriend and thank you letter all in one. When me and her first met I was in a very low point in life overly consumed by playing music and partying. I found myself living a life my parents wouldn’t be proud of. I was sinking fast. I could tell you some crazy story’s if I could remember them, but she came into my life like an angel and pulled me out of the darkness. She made me focus on my dreams to be a songwriter. She was and still is my biggest fan and my best support. Without her I doubt anyone would be hearing my music, so thanks babe, you’re the best!

This is one of my oldies and I’m sure you can find a sloppy, half lit, young me playing it somewhere on the interwebs. This song I wrote sitting on a front porch of a cabin in the most peaceful place on earth. The song tells a story of a young man visiting a town and falling in love one night that seemed to last forever. But he knew every good thing comes to an end and he must face the truth in the morning. Thank you again to Hayley Stephens and Ryan Nelson for bringing this song to life!

I could say so much about this song being it’s like a child to me, lol. But I’ll try to keep it short and sweet…

This song I wrote with no idea on how to write songs. I just wrote what was in my head and what I felt in my heart. Like I said previously, I traveled a lot when I was younger for work and I wrote this song somewhere in Knoxville, TN. After spending a couple months there, I just wanted to come home and writing this was the best way to get rid of those home sick blues. But that wasn’t the end of this song. I would come home for the weekends and play local bars.  I started getting people requesting this song which was a first for me. I couldn’t understand why they would want to hear something I wrote. But it started giving me the confidence to write more and to perform the songs I wrote. It started to bring other artist to work with me and want me to write songs for them as well. This song single handedly changed my direction in music and took me to a whole new level. That’s why I’m naming my EP after it. Also, because it took me way too long to release the damn thing. I’m sure my friends, family and fans can agree on that.

Asher’s unique voice and eclectic song choices make this project very interesting. Ryan Nelson explains this project and why working with Asher was so meaningful “Every song is unique stylistically, from country to rock to r&b and pop, so I got to really show off some of the skill sets that are deeper in my wheelhouse. Working with great friends is always special because it allows you to not be afraid to reach for things and try things that you’re unsure of how they’ll turn out.” While Asher Cataldo’s music takes it’s ques from many types of music the things that make it country are the real life stories and truthful lyrics.

Without further ado, take a listen to Asher’s debut release Way Too Long.