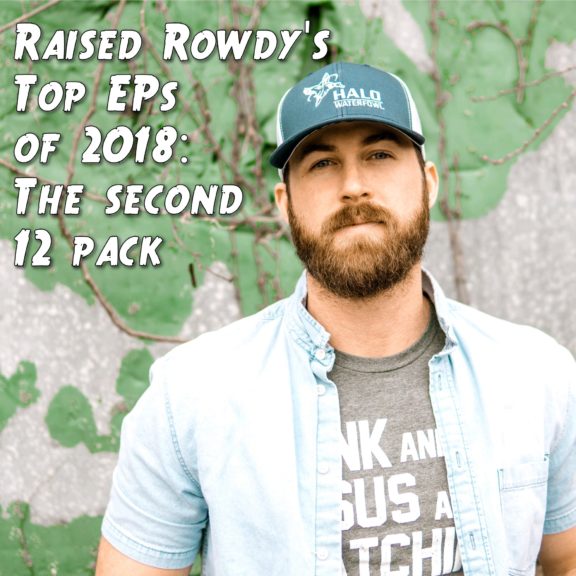 Over here at Raised Rowdy we like to champion the underdog, people we don’t think get the love they deserve. We hope over the course of this year we helped you hear some new music or maybe reminded you to keep listening to the best of the old stuff.  These EPs are a mix of new artists we love with a few veterans mixed in.  These are our favorite EPs of 2018.

Some of the best things in a world are able to be split into two equal parts. A pack of Reese Cups, an one of our favorites a case of cold ones.  For this project we are going to do that. so in alphabetical order here is the second 12 EPs that topped our list in 2018.

Kolby has SHOT onto the Texas music scene in a big way. His song “Every Single Kiss” should be on the radio in all 50 states. He is that damn good.  Texas is stirring up the pot a lot in the music industry right now and Kolby is the cream of the crop.

This EP is all about the music — the voice.  You get a piece of what makes Kyle and his music so special in each track of this project. Somewhere between Blackberry Smoke and mainstream country sits Kyle and his band. Listen to each track and you will have this EP on repeat for days.  Now, wait until you see him live and watch him melt your face into a puddle with his guitar. LIFE CHANGING live show. When he is on stage he commands your attention. It really is a thing of beauty to watch.

This bell bottomed princess is a little Janis Joplin, a little Jewel with a sprinkle of Lucille Ball (Watch her Instagram story for constant smiles and laughs) Bonus: Lainey’s song “High On Somethin’” that was released a week after the EP might be my favorite track she has put out so far.

Good Lord. This record leaves me speechless. I remember the first time I heard “Workin’ Overtime” while she was sitting on the Revival pew. This girl is a star and she can write with the best of them.

This voice. Come on, If you’ve heard Mitchell before, you get it. He could lay on the floor and sing into a microphone reciting the ingredients from a shampoo bottle and we would listen. But he doesn’t, he takes over shows with great songs and his amazing vocals. This Nashville product has been around music his whole life, and it shows.  He is about to be a star.

This duo not having a major record deal is one of the biggest travesties in country music.  These guys flat out kill it live. Alabama has been pumping out some damn good country music, and these boys (along with Riley Green) are at the top of the list.  We have made a meme of these guys as Brooks and Dunn and while that is a lofty goal for a duo so new… these guys have the power to do it. The sky is the limit.

Riley’s Big Machine label debut. Four very well written songs that when you pay attention to the lyrics are about so much more than just being in a truck.  Riley has kicked country music’s door WIDE OPEN and his authentic brand of mainstream relevant country music is here to stay. Can you say superstar?

Sam is a different voice that what many would call classic country music and that my friends is why we love him.  He falls between rock, Southern rock and country and by God that is just about our favorite combo.  Southern music to fill the ears of the faithful.  Can’t wait for more new music from Sam next year ( Average Joe’s debut release coming in 2019). He and Taylor Phillips penned “A Little Like Me” and when you hear that first track, you won’t stop playing the rest of this one.

This EP absolutely floored me the first time I heard it.  Her voice is so emotional. The acoustic style just made so much sense. There is so much power in the simplicity of these tracks and Tenille is one of our favorite voices in country music.

Jon Pardi’s Axeman and Raised Rowdy Spirit Animal Terry Lee Palmer aka TLP dropped some of the most Honky Tonk jams on you this side of Texas. Fun, real and American. One of our absolute favorite projects from one of the baddest men on the planet.

Tyler has long been on our our favorite songwriters in Nashville, Penning hits for multiple artists while leaving many wondering when he would release his own project.  Well that time finally came in 2018 with this 6 pack of tracks he gave us to listen to while sitting on a stool somewhere in a Honky Tonk.

These boys are both Uber talented with amazing voices and quality songwriting chops, but something special happens when they get together.  Their voices go together like Peanut Butter and Jelly, Like salt and pepper and dare we say, Like Sundays and day-drinking.

Zach has roots in Opera, which translates to soulful country songs with big notes and heartfelt lyrics. His song “Wildfire” is very, very good, and “Nobody Frames A Bad Day” is a song that hits home like a ton of bricks. These words come to you from our friend Claiborne of Texas Local Live

We didn’t forget about you Brinley we just wanted to see if you were paying attention.

Brinley Addington- Songs from a Bar

This EP is the Honky Tonking beer cheersing good time music we dream of when listening to a project.  A mix of tracks we can’t get enough of make sure to give Brinley’s EP a listen.