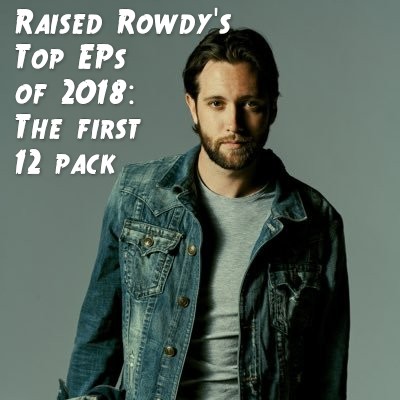 Over here at Raised Rowdy we like to champion the underdog, people we don’t think get the love they deserve. We hope over the course of this year we helped you hear some new music or maybe reminded you to keep listening to the best of the old stuff.

These EPs are a mix of new artists we love, with a few veterans we can’t get enough of mixed in. These are our favorite EPs of 2018.

Some of the best things in a world are able to be split into two equal parts. A pack of Reese Cups, Dealt Aces in Blackjack, and one of our favorites a case of cold ones.  For this project we are going to split these EPs into two batches. So in alphabetical order here is the first 12 EPs that topped our lists in 2018.

Crazy talented, distinctive voice and songs that truly show her personality Abby’s EP is one of our favorites of the year.

This guy is going to be on your radio and soon. He brings back a sound we haven’t heard since John Michael Montgomery was yelling, “Sold!” Adam Sanders will give you hope for this world of country music.

Brandon’s music lends itself oh so well to his high energy stage performance.  Each song is catchier than the next. Playlist gold to get you in a great mood. The future is bright for Brandon and this EP shows you what you can expect from him moving forward.

CJ Solar- Get Away With It

With songs that in our opinion should have been # 1s or damn close his music should be familiar to you already.  “American Girls” makes me want summer to last for ever. Can’t it just last forever…?  CJ is doing his best to make sure as least in your mind it can.

Craig Campbell has pretty much only put out great songs since hitting the scene. Usually artists with as much star power and clout don’t release EPs but someone must have told Craig they would love to  “See You Try” and boy are we glad they did.

One of Raised Rowdy’s great friends Christie introduced us to this duo via Facebook video, and we could not get enough.  These boys are a little southern rock and a whole lot of country,  Think if the lead singer of the Black Crowes (Chris Robinson) was 23 again and played with the baddest dobro player this side of Kurt Ozan. These boys are super fun live and they have the whole musical world in their hands with the style versatility their sound has.

Classic country revival. Drew’s voice will take you back in time to when you grew up. The best of what you love with some modern feel to it.  His EP does not have a bad song and whether you see him acoustic solo or with a full band his songs and voice draw you in just as they do on the EP. His unreleased song “Middle of Nowhere Class” is a freaking JAM (He wrote it with Erik Dylan and Driver Williams). I go to Facebook videos weekly to listen to his version. OH YEAH and Drew got with his buddies and wrote a song after one of Raised Rowdy’s favorite hashtags and sayings ALL THE BEERS

This EP is so damn catchy. If you tell me the first time you stumbled upon it you did not listen to at least one of these tracks 45 times in a row until your significant other screamed at you then you are lying. (You know they really enjoyed it too they just had to pretend not to)

Jameson has the entire package on this EP.  His voice is dynamite, every single song on this is a home run and all the songs fit so well together as a project. I wore this EP out fast, but i still keep going back to it. I just can’t get tired of it. It is so damn good.  Jamo put me down for the presale on the debut album on vinyl right now, bud. I  know with 100% certainty you will not disappoint.

The first time I heard Jobe’s voice, I literally stood up at my desk at work.  His voice is THAT good.  Somewhere between Southern Rock, Red Dirt and mainstream country. Jobe is one of my absolute favorite people I have met in Nashville. He’s as genuine of a guy as you could ask for and his songs prove that.

Call us early adopters if you will to the Kenton Bryant fan-club.  We have been on Kenton’s bandwagon since we heard his first YouTube video for “Since You’re Gone” His EP is flawless. Solid mix of country and rock influences with that gritty voice.  Radio friendly but real and honest.  Check his music out ASAP if you haven’t

Kimberly Kelly- Don’t Blame it on Me

Kimberly comes to us from the great State of Texas and boy are we thankful for their gift of this angel voiced maiden.  Kimberly’s song selection and southern styling is exactly what we love in our female artists.  Give her EP a listen and we are sure you will agree with us.