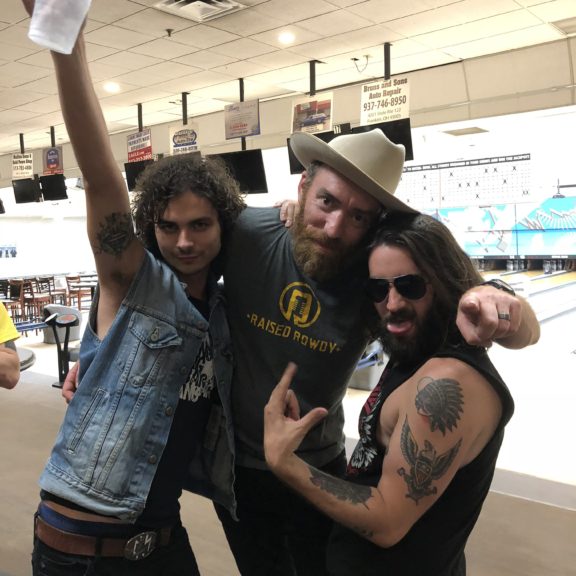 From Grunge to Country: an Unexpected Path Traveled

I posted a poll on my Instagram story last week asking if my next article should be “how I went from grunge to country” or “why The Cadillac 3 are to blame”.  The results were fairly even, with my boy Zach from The Josephine’s even, tongue in cheek, busting my chops that they were basically the same.  The more I thought about it I couldn’t come up with a credible reason as to why they were more different than they were alike. While TC3 certainly kick-started my transition and love affair with country music, I started realizing the people and artists that they brought me in contact with are what kept me traveling down the country music freeway without looking for an exit.

Before I delve into the stories of how Nashville got its barbs into me, I feel a wee bit of backstory is necessary.  You see, I was born and raised in Northwest Ohio, and still call it home today.  It’s where I met my wife, and where my daughters know as home.  This part of the state, and country for that matter is not what one would call a hotbed of entertainment.  My friends and I played sports, hunted and fished year round and were perfectly content with our surroundings.  Or so we thought.  As we grew older and started to learn there was more out there, we perhaps lost some appreciation of what we had.

Oh yes, I did include the word grunge into the title, didn’t I? I’ll age myself here a bit by telling you the first two cassettes (yes kids, cassettes.. the things you had to rewind with a pencil you found on the floor of your car) my Mom bought for me were Pearl Jam Ten and Stone Temple Pilots Core.  Let me repeat that for the ones who live #frontrowordontgo and didn’t hear that.  MY FIRST TWO CASSETTES WERE PEARL JAM AND STP. Hahaha there.  Now we have a baseline to start from. I can vividly remember being in the weight room in high school and hearing “Chattahooche” blaring so loudly that I could barely hear myself think.  My friends and I didn’t even want to be lifting weights, let alone while being forced to listen to what we thought were wannabe cowboys singing about rivers and beers.  To complicate matters, it seemed that only the country stations back then would get good reception on the radio.  When we listen to music, read books or watch movies, most of us want to be transported somewhere; not be mired in what we already know about.  That in itself was the driving reason for us not liking country music.  We were already living what they were singing about.  Being full of angst and having pierced ears seemed far cooler to us.

Fast forward more than a few years to 2014 and I found myself firmly planted in a musical rut. There wasn’t much music that was doing anything for me.  Sure, one of my friends had turned me on to some country like Jason Aldean, Gary Allan and Joe Nichols, but nothing that I was really passionate about.  The rock and alternative scenes didn’t tempt me much either.  Everything changed one day that summer when one of my best friends sent me a text that I’ll never forget.  He simply said “do your ears a favor and give The Cadillac 3 a listen.” From there on out, life took a complete turn. Pulling my phone out and running a quick YouTube search of the band of course produced The South as the top hit. I was entranced while listening to it knowing very well I had never heard it, but for some reason couldn’t shake the feeling that it  been playing in my subconscious for years. From there I fell into a rabbit hole of music that opened my eyes and ears to what songwriting and music looked like outside the 4 walls of country radio.

The more research I did and online groups I joined, the more I started to understand the impact the group had on people like me.  I started discovering new artists that the group would take on the road with them like Ryan Beaver, Ryan Hurd, Joey Hyde, Channing Wilson, Hannah Dasher and so many more incredible songwriters and performers that I became fixated with.  As an aspiring writer, I gravitated to the artists who were not only able to beautifully string words together as a verse, but also sang them in a way wholly identifiable to only them. And…they were country! They were diving into topics so much more diverse than what I had perceived “country music” to be!

And the people.  I cannot even begin to heap enough praise on people I’ve met who I can now thankfully call friends. Friends that would see that I liked The Cadillac 3 and would say, “I love them too, but have you heard about so and so.”  Innovators like the Brothers Appell, Rob and Ryan, who were instrumental in helping me discover people like Ryan Beaver and Steve Moakler. My wife who would read everything I wrote and faithfully trudged across the midwest with me chasing new music.   Friends like the Kish’s, the Stanley’s and the Hample’s who fed me new music, but also supported my endless need to discover and write about new country music.

Perhaps a few of you have heard, or hopefully met Mr. Nick Tressler.  A more fervent supporter of country music has yet to be placed upon this earth.  It may come as no surprise that I met Nick through Instagram after he commented on some TC3 posts of mine.  Take a wild guess who was playing at The Dusty Armadillo the first time we met?  Once again, everything good surrounding me and country music traces back to Jaren, Neil and Kelby.  Had I never discovered them, there’s more than a good chance you wouldn’t be reading this article either.  Meeting Nick and having him place the confidence in my ability to share country music with you in a unique way was a once in a lifetime shooting star moment.

Chase your passions. Explore new outlets.  Stay wildly and unapologetically true to what fuels the fire deep within you. Country music can do a lot more for you than you expect.  We are about to enter an era of music that people will be talking about many years from now.  Stick with us and we’ll keep setting the table and offering you seconds.