HomeCountry MusicLandon Magee: From playing Mexican restaurants to the most famous Honky-tonks and beyond

Landon Magee: From playing Mexican restaurants to the most famous Honky-tonks and beyond

Since recently moving to Nashville, Louisiana native Landon Magee has made big strides toward becoming the newest star in country music. The 21 year-old has made quick connections and has a work ethic that will propel him to the next level.

Magee started out playing in Louisiana at venues that were quite different than what you would find on Lower Broadway. “Back home, I didn’t know anything. I didn’t even know anything when I moved to Nashville. I used to play at Daiquiri shops and Mexican restaurants. I never even played a real show and I went to school for two semesters back home, but over that summer break, my mom told me that if I wanted to move to Nashville that now was the time because I wouldn’t get that chance again so I gave it a shot” he says.

The gigs at the Mexican restaurants will likely no longer be a needed, as he now performs in honky-tonks and barrooms. Just recently he played in St. Louis, at Game 6 Honky Tonk, located just blocks from Busch Stadium, home of the St. Louis Cardinals. 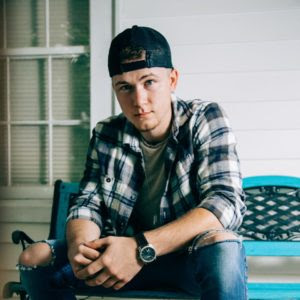 Magee’s stage presence and music are largely dependent on his guitar playing. After seeing Landon play you might find it hard to believe that he has only been playing guitar for about a year and a half as he picks like a seasoned veteran on stage.

Speaking of guitars, Landon will be picking on his new Rose Creek guitar that he had the opportunity to customize. Rose Creek is a company based in Georgia and they have crafted Landon and fellow artist Justin Bryan guitars. “Justin and I were playing a show with our buddy Mark Sellers in Alabama and this guy came up to us and mentioned a guy from Georgia that makes his own guitars. He started showing me pictures of some of the guitars he had made and said that he was looking for ambassadors.  When we got back to Nashville, Justin called the guy and he told us to come down to Georgia and try out some of his guitars, so we packed our bags and headed down there.  It was the best sounding guitar I had ever played. Justin and I designed our guitars, picked what we wanted and he made it happen. I’ll be playing this guitar until my fingers stop moving” he says. 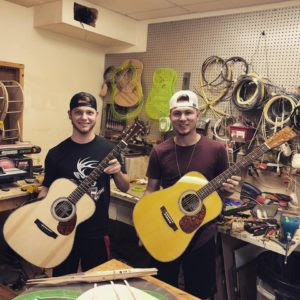 Bryan and Landon have shared the stage before. The duo opened for artists like Josh Phillips and Russell Dickerson on the Saloon Stage, at the infamous country music festival Country Concert in Fort Loramie, Ohio. “It was cool man. After our show we got to hangout with guys like Russell Dickerson and Adam Doleac before they took the stage. I’m real good friends with Adam Doleac’s guitar player so it was cool to hangout with those guys” Landon says. Headliners like Toby Keith, Midland, and Jo Dee Messina capped off the night on the Main Stage of the festival, a spot both Bryan and Michael hope to play one day.

The next year for Landon Magee has the potential to have a major impact on his musical career. He currently has two singles available on streaming sites like iTunes and Spotify and he plans on putting out a new EP in early 2019. Check out his latest singles “That’s What She Said” and “Make You Mine” and follow him on Instagram and Facebook to stay up to date on tour dates and new music!