After making names for themselves on stages from Nashville to Texas
and everywhere in between, Haley Stevens and Julia Kate Snow have
joined forces to create Sweet Leah. Drawing inspiration from other
powerful musicians, such as Raised Rowdy favorites Meghan Patrick,
Lainey Wilson, Kasey Tyndall and The Cadillac 3, these girls are ready
to crash the party by tearing down the walls of the boxes they see
female country singers fit into all too often. “As songwriters we
always strive to tell stories from the renegade perspective. We’ve
always drawn inspiration from the writers and artists that are
knocking down the walls of that box and blazing a trail.”

On their debut single, of the same name, “Sweet Leah”, Haley and Julia
Kate tell the story from the perspective of the other woman in their
“cheating song”. Released today, this song started out as rock song.
Jude Dyllan helped the group adopt an early Whiskey Myers vibe that
comes through as crunchy southern rock riffs, twang and damn fine
harmonies, all bundled together.

So, how did two solo artists come together as a group and end up
deciding to name their debut single after the name of their band? As
they tell it, it was destined to happen. Sometimes good things just
come together as they were meant to.

“People always ask which came first, the song or the band name.  The
truth is it was the song. We had been writing together for about a
year and this was the song that made us reevaluate. We’ve both been
solo artists for years and we both love making music, but sometimes
you just realize you’re on to something special.” 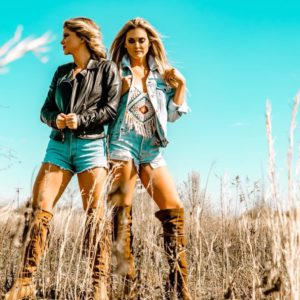